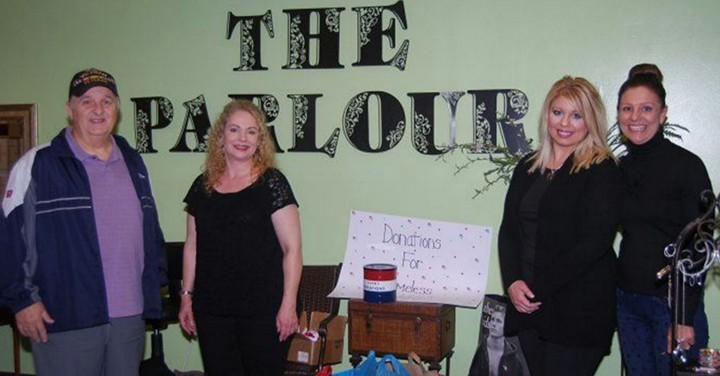 Carmel resident and business owner Jennifer DeLong wanted to help give back to the military after she lost her father, Fred Wilson, a former lieutenant commander in the Navy, to cancer two years ago.

“My dad … was an ophthalmologist at IU Med Center. He would go to the VA hospital in Indianapolis every week to take care of patients and teach residents there. He had such a love for the residents and the veterans,” DeLong said. “When he got cancer that was the one thing that kept him going and gave him a sense of purpose, even when he was sick. Even as he was battling cancer, he would continue to go to the VA even though he was retired, to see his patients.”

Unfortunately, as her father’s cancer progressed, he told his daughter he wouldn’t be able to visit the hospital anymore. DeLong wanted to help keep her father’s legacy of giving back to veterans alive. She began to think of ways she could help.

DeLong decided to hold a donation drive at her salon, The Parlour Hair Artistry in Carmel, to benefit homeless veterans. Originally planned to run through the month of December, the drive was such a success that she decided to make it an ongoing effort.

“My whole purpose in doing this is to continue on my dad’s love and dedication for the veterans and his residents,” DeLong said. “I just decided this year was the year to do that.”

She said she wasn’t sure exactly where to donate the items but didn’t have to look far to find someone who could help. Becky Summers is the nail technician at DeLong’s salon. Her stepfather, Steve Milbourn, is Commander at the Greenwood VFW Post 5864, and he collected December’s donations to distribute.

Anyone can donate items such as clothing, blankets, books, crossword puzzles and more by dropping them off at The Parlour Hair Artistry, 301 E. Carmel Dr., Suite F400.