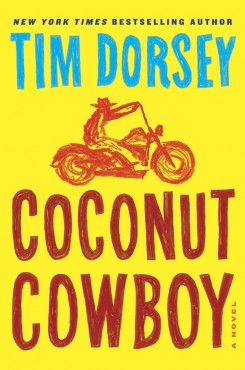 Tim Dorsey typically hits the road when preparing to write a book.

“You always hope you are getting better, so you want the latest one to be the best,” Dorsey said. “I like this one because a lot of the books involve road tripping, which I enjoy doing. This one was a real heavy road trip, starting in the panhandle and traveling down into Florida. I like to have my characters visit real, live places. I search out little-known facts of Florida that I can share with the readers. I try to be inspired by the locales to come up action with the books.”

Dorsey’s 19th book, “Coconut Cowboy” was released Jan. 26. Dorsey, a New York Times best-selling author, will speak and sign books at the Carmel Clay Public Library at 6:30 p.m. Feb. 29. Dorsey, who was born in Logansport but raised in Florida, is familiar with Carmel as his father, Fred Dorsey, lived in Carmel for several years before moving.

“These are dark satires about life down here in Florida,” said Dorsey, who worked at The Tampa Tribune as reporter and editor for several years before becoming a full-time author in 1999. “I touch on a lot of stuff I actually see in real life, but I weave a mystery plot through it and have my characters travel around Florida.”

Serge objects to serial killer label, referring to himself as a sequential killer. Dorsey said unlike serial killers, Serge never intends to kill anyone but believes jerks keep crossing his path.

Dorsey, a 55-year-old Tampa resident, said being an author was his dream.

“When I was in high school, I discovered writers like Kurt Vonnegut and Joseph Heller and decided that would be my dream job,” Dorsey said. “I kept thinking it was a long shot but kept plugging away. When my first book went on sale, that was my last day at the newspaper.”

His first book was called “Florida Roadkill,” the name of the TV series being developed by Sonar Entertainment based on the books.