You are at:Home»Current in Carmel»Carmel Community»Carmel City Council considers up to $20M in bonds for Midtown parking garages 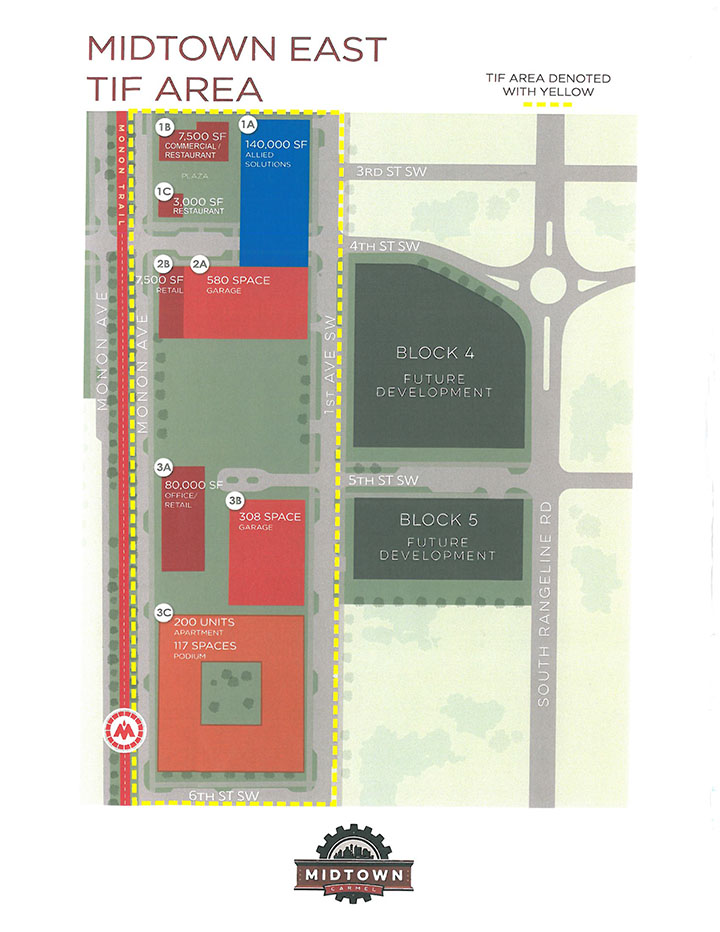 This map shows an updated plan for development in the Midtown area. (submitted photo)

After approving more than $200 million in bonds for new infrastructure for the city, the Carmel City Council is now considering $20 million in new bonds to help build two parking garages for the soon-to-be redeveloped Midtown area of Carmel.

The garages are planned to have 580 and 308 spaces to support five new mixed-use buildings along the east side of the Monon Trail. Some of the bond money would also help pay for a public plaza planned for outside of the 140,000-square-foot headquarters for Allied Solutions. Plans also include 7,500-square-foot and 3,000-square-foot restaurant/commercial buildings in the plaza. The project has a 2019 estimated completion date.

The $100-million-plus Midtown development is being led by Carmel-based Old Town Development and has undergone several changes since its announcement more than a year ago.

In May 2015, Merchants Bank of Indiana held a press conference at Carmel City Hall with Mayor Jim Brainard to announce a $25 million project on the corner of 4th Street and Monon Avenue. The 100,000-square-foot building is expected to house the bank’s new headquarters. Officials announced a 2017 move-in date.

But looking at a map handed out at the Feb. 15 council meeting, that building was not there. Allied Solution’s headquarters, announced in January, is now shown in that location. When asked where the Merchants Bank headquarters will be located, city officials said it will be west of the Monon and will likely necessitate a third parking garage that will likely need another bond from the city.

Another change affects properties along Range Line Road and 1st Avenue SW. More than a year ago officials announced that several buildings would be purchased by Old Town and then demolished to make way for a parking garage to support new development. It appears those plans are on hold with those areas labeled on a map as “future development.”

One business located in this area, Miller Auto Care, was planning on moving into a new building along Range Line Road to allow for demolition of its current location. Plans for that building were presented to the Carmel Plan Commission with architectural drawings, but Old Town officials said there is no immediate timeline for constructing that building. In the meantime, another business, Amanda’s City-Chic Consignment, moved into a new location on Carmel Drive near Keystone Parkway. A year ago, Old Town officials were predicting that demolition on the consignment shop’s previous building could have begun in fall 2015.

Plans and drawings for the Merchants Bank headquarters were also presented to the plan commission in its previously expected location.

On Feb. 15, the council introduced two proposals: one to create a tax increment finance district to use a portion of property taxes to pay off bonds needed to construct the parking garage and another proposal for the parking garage bonds themselves.

The bonds would be backed up using a special benefits tax as protection. The Carmel Redevelopment Commission is projecting a $69 million increase in assessed value by 2020 that will allow TIF funds to be available.

The council sent the proposals to committee since the matters haven’t been passed by the plan commission yet. They left many unanswered questions about the project, such as financial details and the number of rental units versus for-sale condominiums.

City Council President Ron Carter said he would have liked to have seen a plan months ago that allows for protection of the natural environment surrounding the Monon Trail. He said he has a little “heartburn” because no contracts have been signed regarding what work will be done to improve the Monon.

“I can’t emphasize enough, where we have trees, keep the trees,” Carter said.

These new plans for Midtown come on the heels of new bonds passed by the City Council that includes money to redevelop the Monon Trail in this area, making improvements and allowing for a two-lane Monon Avenue that will support increased use in this part of town.