Erica Jenkins figured it was time to get back to her musical roots. 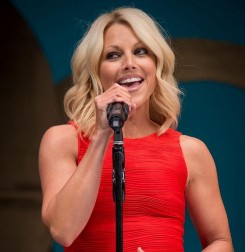 Erica Jenkins of Carmel will be on stage Feb. 18.
(Submitted photo)

“I can hear myself telling my boys to follow their dreams and do what you are passionate about,” Jenkins said. “I felt I abandoned what I thought is me and I’m not going to let that happen.”

Jenkins, a Carmel resident, will perform a cabaret-style show called “Songs that Speak” at 7 p.m. Feb. 18 at the Studio Theatre in Carmel’s Center for the Performing Arts.

“This is my re-entry into performing,” Jenkins said. “These are songs that speak to me and are a vehicle for my career.”

Getting ready for the performance seems right to Jenkins.

“This is a passion that you just can’t shake,” Jenkins said.

Joining Jenkins in the performance for a couple of songs will be Indianapolis resident Deb Wims and Ball State student Laura Merida, from Vincennes.

“I invited someone from my past and someone I feel has a remarkable future,” said Jenkins, who plans to perform favorites from musicals such as “Wicked” and “Les Miserables.”

Jenkins, 36, has been a stay at-home mother for the past four years for her sons Layton, 4, and Liam, 2. Layton is Jenkins’ maiden name.

While performing in Indianapolis, she started teaching with her former music teacher.

“I fell in love with teaching kids more than doing it myself,” Jenkins said. “So I opened a performing arts studio (Elite Performance) in Columbus in 2004.”

Jenkins continued teaching and commuting from Indianapolis until she was having her first baby. While raising her sons, Jenkins does not want to go back to doing shows that are several nights a week.

“The goal is to create new opportunities like this show,” she said.

Tickets are $20. For more, thecenterpresents.org.