You are at:Home»Current in Carmel»Daily visit to iFast gym helps Carmel woman, 88, heal from fall 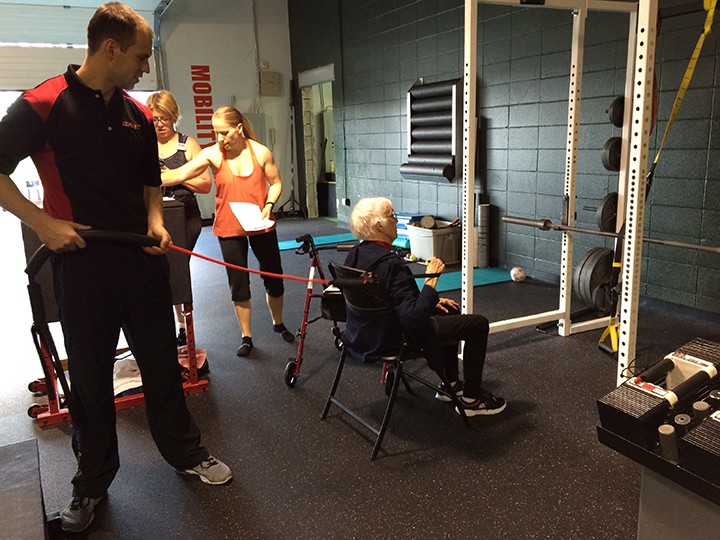 Carmel resident Janice Tulbert recently began a quest to get healthy through exercise. But unlike most people launching a workout regime, Tulbert is nearing 90 years old.

Tulbert, 88, fell and cracked her tailbone in late 2014. While nothing was broken, she suffered damage to her tailbone and back.

“That took me to the emergency room. From there, I went to the hospital. The hospital sent me to a rehabilitation facility,” she said. “When I came home, I could neither stand up nor walk by myself.”

Her daughter, Beth, knew Tulbert needed to do something to get her agility back. What she had in mind wasn’t exactly what Tulbert wanted to do.

“My daughter had been going to this gym for a long time. She liked them very much. She told me she knew what I needed to do. We both knew, but I didn’t want to go. She told me she had signed me up at the gym and made appointments for me for the next four weeks,” Tulbert said.

She began working out three times each week with a trainer at iFast in Carmel and quickly became a fan of exercise and the people helping her.

“I fell in love with it the first night – the people, the place and everything they did. They took me in the first time I was there,” Tulbert said. “By the time I left there, I was in love with all of them and couldn’t wait to go back the next night. I’ve been going ever since, and I thoroughly enjoy it.”

Tulbert’s trainer, Jae Chung, has never worked with an 88-year-old client before meeting her.

“She’s the oldest client that I’ve worked with, and she comes in with her walker. We do a lot in terms of getting her to sit down in a chair and stand up by herself. She managed to do (that) after about three weeks after working out with us. That was a huge moment for her. She had a huge a smile on her face the day she could do it,” Chung said.

Tulbert is now able to stand up on her own and walk with a walker. Not only did she notice the change, but her doctors did, as well.

“The first time I saw my doctors, after I had been going to the gym for a while, they were amazed at how quickly I got to where I am and how well I’m doing. Even the trainers say it’s amazing how strong I am considering what I came from and at my age,” Tulbert said.

Chung pointed out that while most people think they lose balance as they get older, they really lose power.

“What people lose is power production – the ability to produce force quickly. They cannot use their strength in a quick manner. So, when you develop strength and power for older people, that improves their balance,” he said.

Tulbert said the real lesson to learn in all of this is that you can do it if you put your mind to it.

“My motive is to not go back to a hospital bed. I had a choice to make. You can sit here and say, ‘I’m not going to do anything about it,’ or you can start moving,” she said. “I chose to get up and start moving. It’s nothing but God’s miracle that I’m moving around as good as I am today.”