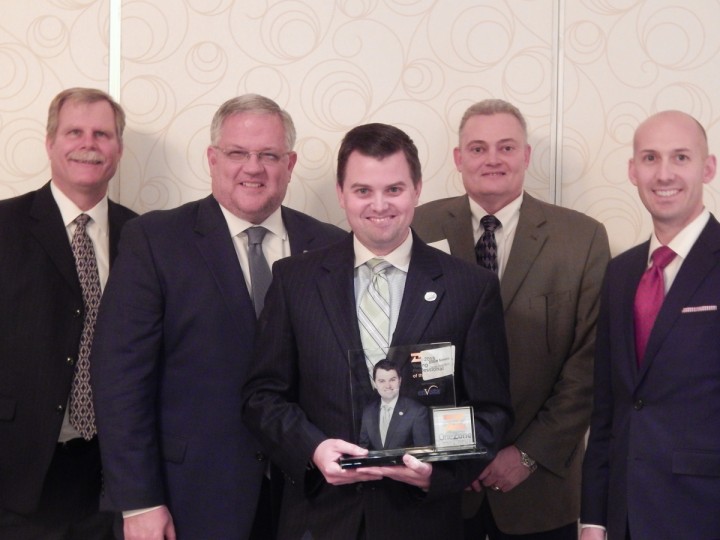 Each year, OneZone recognizes various companies and individuals for business achievement and impact.

The Carmel and Fishers chambers of commerce merged earlier this year to become OneZone, and also merged their annual awards ceremonies into on event held in Carmel.

The event took place this year on Dec. 15, at the Ritz Charles. Following lunch, new and existing members of commerce were recognized and honored.

Table and event sponsors then spoke, thanking the members for allowing them to continue to help support the annual event. The Master of Ceremonies for the event was WTHR political reporter Kevin Rader. The luncheon was sponsored by Forman Investment Services.

Winners of the many awards given out were selected by an awards committee. The first award given out at the event was for the Young Professional of the Year. This was awarded to Elliott Somers, an employee from Citizens State Bank.

The Look New Construction award of Carmel and Fishers was given out to St. Vincent Carmel Women’s Center and Depot at Nickel Plate Apartments, respectively.

The next award to be presented was the Green Award, selected based on outstanding eco- friendly work. This was presented to Mayer Najem Construction in downtown Fishers.

The next award, known as the MV2, is given out to the most valuable volunteer. The winner of the award was Tom Branum, Jr. The Lifetime Achievement Awards for Carmel and Fishers were given to Alan Potasnik and Gary Reynolds, respectively.

Finally, business of the year was presented to both Old Town Design Group and Tom Wood Automotive Group.