You are at:Home»Current in Zionsville»Buffalo Wild Wings to unveil new prototype at Anson on Jan. 10 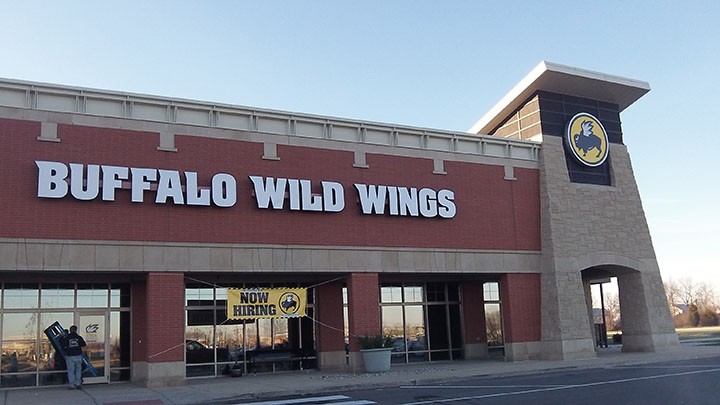 Whitestown’s Anson will be home to a new style of Buffalo Wild Wings on Jan. 10.

“This is one of the first stores in central Indiana that’s going to have a new prototype as far as the design of the restaurant,” said Tony Kwiatkowski, director of marketing for the franchise group that owns 16 other Buffalo Wild Wings locations.

“People are going to walk in and go ‘holy cow’,” he said. “This is totally different to what they’re used to seeing.”

The “stadia” concept is designed to give guests the feel of being in an NFL or NBA stadium. Three 120-inch Jumbotron screens hanging over the bar area give “it a wow factor when you walk in,” Kwiatkowski said. Nearly 70 additional TVs are placed throughout the restaurant.

On opening day the first 100 people in line at 11 a.m. when the doors open will receive a coupon booklet redeemable for an order of six wings every week for a year.

“Zionsville checked the box on everything that makes for a great city to have a Buffalo Wild Wings,” said Kwiatkowski. “It’s a great community, very fast growing, very family oriented and a great sports community.”

Community involvement will be a focus for the location, which will offer programs to support local schools and teams by donating a portion of sales on specific nights or sports seasons.

“We’re looking forward to how important being involved in the community is,” Kwiatkowski said.

The food remains the same, with the restaurant offering 21 varieties of sauces and dry rubs on chicken wings ranging from sweet or lemon flavored to mild and “Reformulated Blazin.” The menu also includes salads, burgers and kids choices. There is a dedicated take out door for online or mobile orders.

Buffalo Wild Wings started in Columbus, Ohio, in 1982. There are roughly 1,300 locations across the country with at least one in every state.