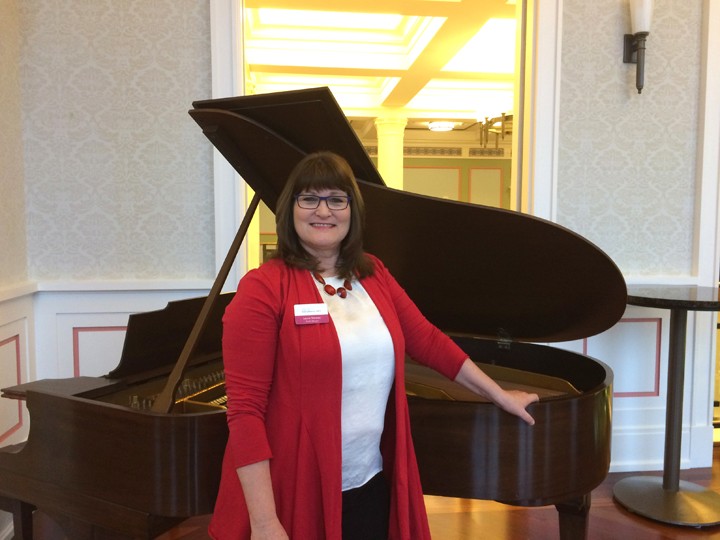 Laura Varnau, the Center for the Performing Arts events manager, inside the Palladium. Varnau plans the biggest parties and concerts for the Center. (Photo by Mark Ambrogi)

Laura Varnau sees no major challenge in throwing a New Year’s Eve party at the Palladium.

“Honestly, there haven’t been any real challenges since we do this every year with our fundraising gala,” stated Varnau, the Center for the Performing Arts events manager. “We know how to throw a party!”

There will be three music rooms on New Year’s Eve with The Bishops and Flatbed Twitch in separate rooms and then P3 Productions providing karaoke in a third room. At 10 p.m., the guests will file into the Palladium for a jazzy performance by The Hot Sardines.

“At our after-party for the gala, we have bands in three different rooms,” Varnau said. “This is just in reverse because we are doing the parties first and then the show afterwards. We’ve all been doing this here for so long. Each part of our staff has their own things they are responsible for. We’ve been meeting every couple of weeks, and it all comes together.”

Varnau, a Carmel resident, started at the Center in September 2010 as an intern. The center opened in January 2011.

Throughout my adult life, I have had several different types of jobs,” Varnau said. “No matter what field I was in, I was always the one planning wedding and baby showers for co-workers and planning the company outings. When I turned 47, I decided it was time to figure out what I really wanted to do so I enrolled in IUPUI’s Events Management program. Since I already had a degree, I opted for the certificate program. At the end of my studies, I needed an internship. The timing was perfect and I was brought on board at the Center to help with the Grand Opening of the Palladium followed by the Tarkington and then the Studio Theater. For five months, I was working 50-60 hours a week as an unpaid intern, but it paid off as I was eventually hired full-time.”

Varnau had couple of other jobs, including house manager, before becoming the events manager about 18 months ago

“What I love the most about my job is that no two events are ever alike,” Varnau said. “I love helping people put together their events and then watching it all come together. It’s very satisfying to see their guests enjoying themselves, even if it’s just a corporate meeting.”

“I think Carmel and Hamilton County have needed something like on New Year’s Eve for so many years,” Varnau said. “For those of us who live up here, it’s a short drive and free parking.”

Anne O’Brien, vice president of marketing and communications, said the Center is encouraged by the response from the public

“We’re planning on this being an annual event,” Varnau said.

8 p.m. — The celebration will kickoff with parties throughout the Palladium. There will be three music rooms and heavy hors d’oeuvres and champagne will be served. The Bishops and Flatbed Twitch Trio will each be in separate rooms. Karaoke provided by P3 Productions will be in a third room. The bands and karaoke will play until 10 p.m.

10 p.m. — The Hot Sardines will begin their performance on the Palladium stage.

Midnight – There will be party favors as the countdown is led by the Hot Sardines.

12 to 1 a.m. – Gourmet desserts and coffee will be served in the lobbies.

Tickets start at $100 and include champagne; two drink vouchers, hors d’oeuvres, the Hot Sardines concert and all festivities.  The New Year’s Eve Extravaganza is on sale at TheCenterPresents.org, the Palladium Box Office and by phone at 843-3800.