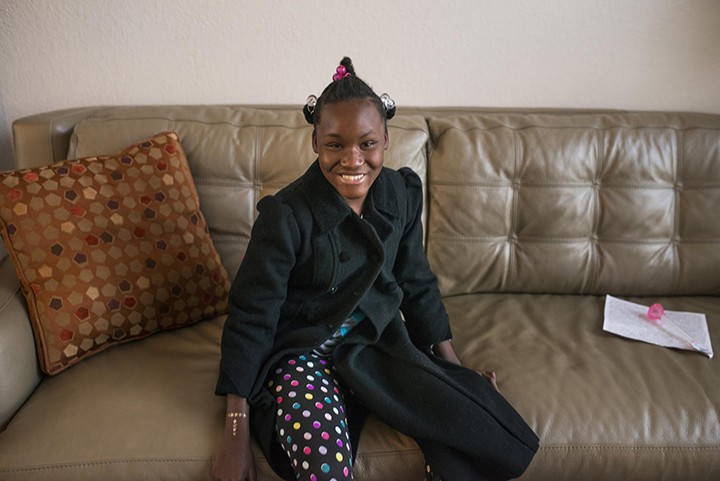 Raphaela, a young girl from Haiti, traveled to the U.S. with the help of Deb and Scott Rigney, of Carmel, to have surgery to correct a club foot. (Submitted photo)

Deb and Scott Rigney have a soft spot for supporting orphanages around the world.

“Both of our children are adopted, our son is from Russia and our daughter is from China,” Deb said.

The Carmel couple helped start BarnRaisers of Indiana, a nonprofit devoted to improving the lives of children locally and globally. Scott, chief development officer at CarDon and Associates, is the president of the board of BarnRaisers.

“With our two children being adopted from orphanages in foreign countries, any time we’re able to give back and help a child we’re thrilled to be able to do that,” Scott said.

That passion has led the Rigneys to bring an 11-year-old Haitian girl, Raphaela, to their home for an extended stay while helping her get surgery to repair a club foot.

Deb went to Haiti for the first time after the earthquake in the summer of 2010. The second time she visited the orphanage in Fondwa, Haiti, she met Raphaela in 2012.

“Her dad died in the earthquake and her mom couldn’t afford to take care of her,” Deb said. “She wasn’t in school and the mom was having a hard time supporting the family.”

The orphanage took in Raphaela, considered an economic orphan, to help get an education and be fed on a regular basis. Deb met Raphaela when she was 8 years old in 2012 and she is now 11.

“She touched my heart because she had just gotten there and she had some post traumatic stress,” Deb said. “Then there was the fact she had a club foot and Fondwa is in the mountains.”

Deb said she asked the orphanage if would be OK if she could help get her foot surgery. Then Raphaela said she would like to have it corrected.

“It just took us three years to get her here,” Deb said.

Dr. Patrick DeHeer, who has a Carmel office of Hoosier Foot and Ankle, did the surgery pro bono last month. DeHeer has made multiple medical mission trips to Haiti and other countries in need.

“We hope this is something that will improve her quality of live significantly,” Deb said. “The first two weeks were really hard because she was in a lot of pain, but I think she’s over that hump.”

Raphaela has had to adapt to all the technology and comforts that she doesn’t have in Haiti.

“I can’t even imagine how overwhelming it’s been for her,” Scott said.

The Rigneys’ daughter, Piper, 7, is in second grade at Prairie Trace. Their son, Cooper, 12, is a Clay Middle School sixth grader. Both were adopted before their first birthday.

“Our kids have been able to be hands on and very helpful and I think it’s a great experience,” Scott said. “We’re considering let Cooper go to Haiti with Deb when Raphaela returns. I think that would be marvelous experience for him.”

Deb has been to Haiti four times and Scott has been once. BarnRaisers is starting a new fundraiser to create a new home for the orphanage. Deb plans to keep in touch with Raphaela by visiting Haiti often.

To contribute to building a Haiti orphanage, visit barnraisersindiana.com/lets-build-an-orphanage.