You are at:Home»Current in Westfield»Westfield City Council hears Tamarack proposal 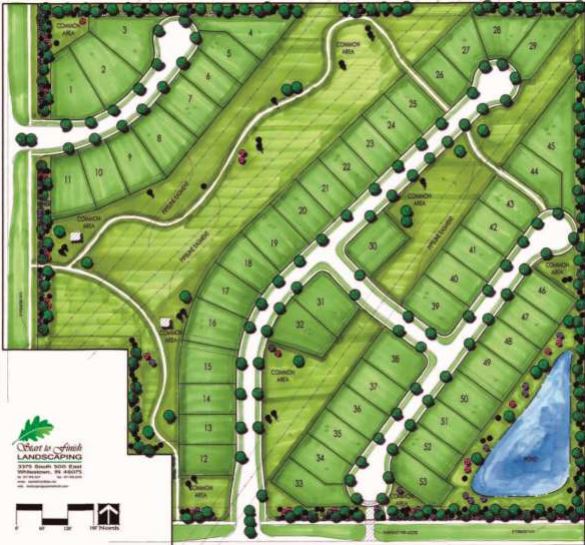 A rendering of the proposed Tamarack PUD District Ordinance. (Source: City of Westfield)

At the Nov. 9 Westfield City Council meeting, the council heard a proposal for Tamarack, a PUD District Ordinance on the northeast corner of 161st Street and Oak Road.

Jeffrey Lauer of the city’s Economic and Community Development Dept., and Jon Dobosiewicz, representing M/I Homes, presented the PUD – on 35 acres with 53 single family lots – to the council.

However, it was not the first time the PUD came into question before the council. A portion of the same property was presented May 1, then a month later was forwarded back to the council by the Advisory Plan Commission with an unfavorable recommendation. The previous petitioner then withdrew the proposal.

“The council heard an item in May for the Tamarack PUD, but it was withdrawn from consideration by the applicant. The current proposal represents a new concept plan,” Dobosiewicz said. “On the south side of the project with Oak Road to the west, there are four parcels at the corner, three of which are not included in the proposal. The parcel that is included was not included in the proposal in May.”

Dobosiewicz also said that in addition to the added parcel, M/I Homes will be contributing additional right-of-way and funding additional road improvements for the corner in question.

“It still looks like the same plan, so I still have the same feelings,” she said. “Not enough has changed for me to alter my opinion.”

“It’s the same thing plus more, so I don’t see how or why this would be any more palatable to the plan commission … than it was the first time around,” Stokes said. “I would suggest we don’t send it on to plan commission and work with it as it was originally. It just seems like we are sending the same thing back, and its more of what they didn’t care for in the first place.”

However, the rest of the council members deemed the project worthy of reevaluation.

“I think one of the concerns that the city had with the previous project was not including the four parcels to complete that corner,” Councilor Steve Hoover said. “To me the project is different than what it was because the parcel is added, and we are looking at some funding to help acquire that property on the corner in the future because we all know that some improvements will be required at the intersection so I think its worthy of the reevaluation.”

The proposal was forwarded onto the APC meeting that will take place at 7 p.m. Dec. 7 at City Hall, 130 Penn St.