You are at:Home»Current in Westfield»Westfield singer Rafaela Farias gets Toastmaster award 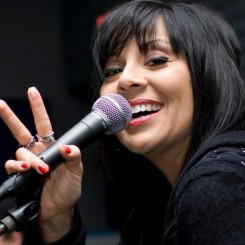 Rafaela Farias never had a problem singing in public.

She just wasn’t so sure she could give a speech, so she joined Westfield Toastmasters Club to challenge herself earlier this year.

“The assumption always was, ‘Rafaela could sing in front of thousands, so it must be easy for her to speak in front of thousands,’ and it’s just not the case,” Farias said. “When I sing, you can hear the sound of the crowd and people moving around. When I have to hear my voice in complete silence, and my voice was the only instrument that I could hear, it was very challenging. So I joined Toastmasters to help me be a better public speaker. When I sing, I’m singing other people’s words and thoughts. When I speak, it’s my own thoughts and own words.”

Farias won the humorous speech contest (5 to 7 minutes) in her Westfield chapter and then won in the first district two competition in Fishers Sept. 24.

Then placed second in the second district two contest in Indianapolis Oct. 22.

“I talked about my Barbie collection and some of the trouble they get into,” Farias said. “I told how my fiancé hung them on the ceiling fan by their wrist and they were spinning around. He blamed it on his G.I. Joe doll and all that kind of fun stuff.”

Farias, who was named the Miss Indiana National Teenager in 1984, worked as a DJ for WFBQ/WRZX and WNDE from 1995 until December 2012.

“As a radio personality you are often given scripted lines,” Farias said. “You have to perform the lines, but again, it wasn’t always my own thoughts.”

She quit the radio station to pursue work on her acrostic duo band “Note to Self.” She has been the lead singer for Don Stuck Band since 1996, and she’s also the lead singer in rock bands Password Reset and Dyrrisoft.

Farias now plans to dabble in standup comedy. She has twice performed at the White Rabbit in Fountain Square, where they have an open mic night.

“I think it will take me at least two years to get good at it,” she said.