You are at:Home»Current in Westfield»Jordan competes in national clay championship 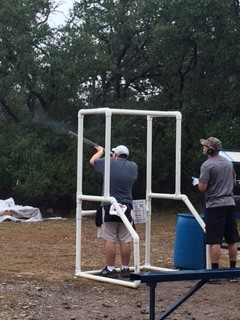 Over the summer, Jordan won the National Scholastic Clay Target Program Championship with two other boys he competed with, also placing second in skeet. The competition over the summer was only for younger shooters, but the competition in Texas included all ages.

“I got into clay target shooting a long time ago, just shooting clays for fun. Then we went into 4-H, and that got me into shooting competitively,” Jordan said.

Over the four days he spent in Texas, Jordan had to shoot 75 targets each day. The competitor who shoots the highest number of clays wins.

“You have to hit all the targets that you can and hope that the amount that you hit is more than the other person,” Jordan said.

To compete in the NSCC in Texas, there were no qualifications although there were several  different classes to compete in, including E, D, C, B, A, AA and Master. Jordan competed in the AA class and is two wins away from becoming a master class shooter.

“I’m just excited to go down there and just see the targets. They always have really good targets down in Texas, and I like to see them,” Jordan said. “I like going out and shooting and being outside, just shooting the targets and seeing what I can do and trying to hit them all. It’s a fun sport.”

The clay targets ranged from 40 mm to 180 mm. Jordan placed 4th in the AA class.