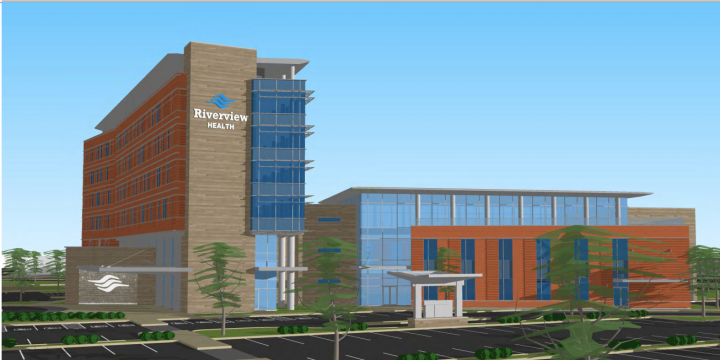 At the Nov. 9 city council meeting, the council heard an introduction with amendments to the Junction PUD District and the Unified Development Ordinance.

In the place where a hotel was once imagined to go, the presented proposal was for a “hospital of the future.”

Out of the 13 acres available, Riverview Health acquired approximately 8.5 acres.

The proposal was not voted on, but will be presented at the Dec. 7 Advisory Plan Commission meeting before returning again before city council at their December or January meeting.

“We’re here to present what our plan is for this subject property,” Christman said. “We are excited to be in this position to move forward and look forward to presenting to the plan commission. The vision we have of this is a hospital of the future. According to trends, these hospitals are not focused on inpatient services, but outpatient services.”

The proposed building is 100,000 square feet and will contain physician practices as well as full-range hospital services.

However, Councilor Cindy Spoljaric mentioned the idea of a hotel being originally planned for that area of Westfield. She pointed out that the hospital would be taking up approximately half of the acreage available for use, decreasing space for the imagined hotel.

Christman responded that there will be two outlots for sale on the property.  Councilor Rob Stokes proceeded to question the expected use of those outlots.

“We will be selling those outlots as the plan develops,” Christman said. “The corner lot is a prime site for a family type restaurant, but we do not have any specifics to the second.”

And despite the suggestions, Councilor Steve Hoover clarified that those outlots could be used to include any of the plans in the original PUD.

“Our plan is to break ground in March with proper approvals, culminating construction in September of 2017,” Christman said.

The proposal will be heard at the Dec. 7 Adivsory Plan Commission meeting at 7 p.m. at City Hall, 130 Penn St.