You are at:Home»Night & Day»Sister act: Zionsville sisters share love of theater in two shows this fall 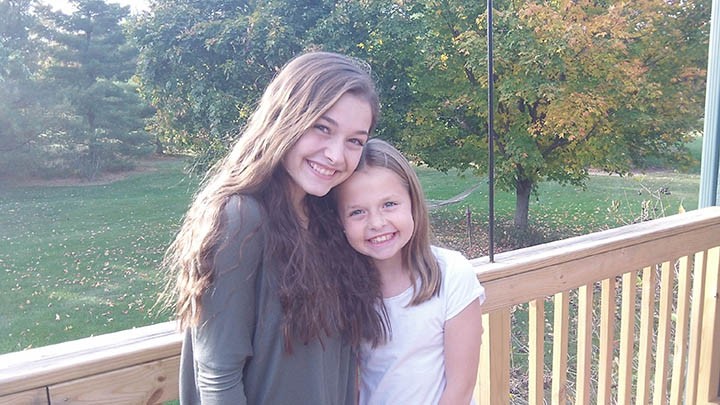 Cynthia Kauffman, 15, and sister Claire Kauffman, 9, are both performing in professional theater productions for the first time this fall. (Submitted photo)

One is playing a sullen teen. The other will portray a bunny. Yet these girls are more alike than different.

Sisters Claire and Cynthia Kauffman have found themselves in paid productions for the first time in their relatively short acting careers. Claire, a third grader at Pleasant View Elementary, will perform in the Indiana Repertory Theater production of “Peter Rabbit and Me” this month. Cynthia, a freshman at ZCHS, is the understudy for the character Wednesday Addams at Beef and Board’s production of “The Addams Family.”

Both girls started acting at The Little Black Box in Lebanon and have performed in community and small theaters throughout the Indianapolis area. The girls are the oldest and youngest in their family of four children.

Kim Kauffman, the girls’ mother, said that Claire auditioned for her first role to follow in her big sister’s footsteps. But after performing in “Annie” this summer, Kauffman noticed that there was more to it. “I realized, oh no, she has the bug,” she said.

Cynthia auditioned for “The Addams Family” simply for the experience of being on that stage, never expecting to be cast.

Since understudies only perform if the lead is ill, Kauffman approached Beef and Boards to ask if they would consider a single performance for family and friends. The idea was approved so on Nov. 4 Cynthia, along with the regular cast, will hold a special performance for which tickets can only be reserved online. There will be no meal included, as is common with Beef and Boards dinner theater, but patrons may bring their own food and beverage. Ticket prices are reduced to $27 as a result and can be purchased online at www.TheAddamsFamily.MyEvent.com.

On the website Cynthia is asking for donations for a friend, Rosie, who has Cystic Fibrosis. Rosie, 15, received a lung transplant but is now receiving treatment for chronic rejection. Both girls met in the theater, so Cynthia would like to raise funds to send her friend to New York to see some Broadway shows.

Beef and Boards generally doesn’t employ understudies, but Cynthia has found the experience to be quite valuable. The seriousness of the atmosphere she finds different than the casual rehearsal schedule she has faced in prior productions.

“It’s kind of hard to keep up with them,” she said. “They get the whole show done in two weeks. It’s a taste of what they do in the professional business.”

The sisters have found it helpful to have someone in the family who understands their needs as performers. “It’s fun having somebody else who knows what I’m talking about,” said Cynthia, who utilized her sister’s help to practice lines, which have to be memorized precisely as the understudy.

“Whenever I get in a show she’ll make sure I’m practicing my lines, she’ll practice them with me,” said Claire. “If I have a dance she’ll show me the things I’m doing wrong and she’ll show me how to do it.”

Claire insisted she helps her sister in other ways too, including her big sister’s wardrobe. “Sometimes you say ‘What should I wear?’ and I help you pick that out,” Claire said.

Claire heard that the Indiana Repertory Theater was holding open auditions and asked her mother if she could attend with her sister. Both girls auditioned, both girls received callbacks, but by then Cynthia had been offered the understudy role. Claire auditioned a second time and was cast as bird, girl and bunny in “Peter Rabbit and Me.”

“Peter Rabbit and Me” is playing from Nov. 21 – Dec. 20. Tickets are available at IRTLive.com.