You are at:Home»Current in Carmel»Carmel Community»Carmel High School team manager doubles as football squad’s No. 1 fan 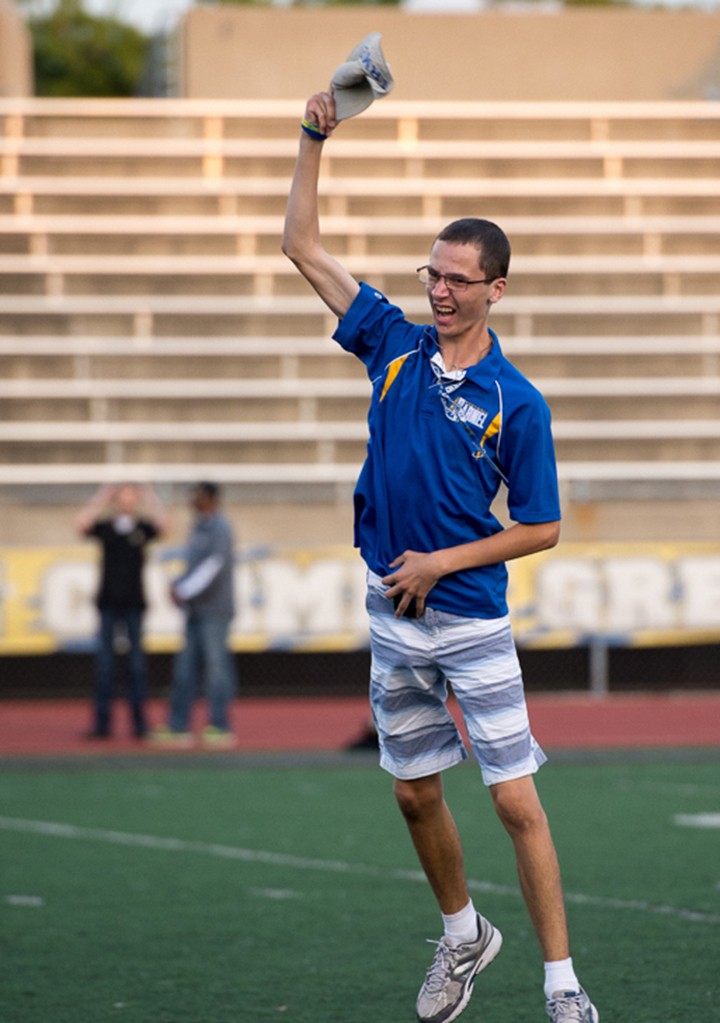 There is little question who has been Carmel High School’s football team’s biggest cheerleader the past four years.

As well as being a team manager, senior Aaron Seals serves that role.

“Man, is he fired up all the time,” Carmel High School football coach John Hebert said. “I don’t know if I have known anyone like Aaron on just how dedicated he is to this effort. It matters to him so much, all day long and in the off-season. He just can’t wait every day to get to practice and do his job.”

Seals, who has high functioning autism, started out as a freshman team manager.

“It’s a tossup between who appreciates Aaron more, the coaches or the players,” Hebert said. “For a long time I thought it was the coaches, but I see signs of players feeding off Aaron’s energy. Aaron is very passionate about the performance offensively and defensively. It’s important to him we succeed. He wears that expectation for the results on his sleeve. In the background whenever things don’t go your way, you can hear Aaron going (off). He calls it likes he sees it.”

“After a loss I have to say ‘Back to Earth. It wasn’t our space,’” Seals said.

Hebert said Seals is very exact on how he sets up his equipment. Yet Seals said his biggest role is motivation.

“It helps build up morale, which could help us turn the tide in a game where the opponent is leading at first,” Seals said. “We’re hoping to get that state championship that has been eluding us the last two years. It’s takes a few days to get over (the loss) but it kind of makes you work a little harder. The third time is the charm, let’s get this state championship once and for all.”

The Greyhounds, who begin sectional play against visiting Noblesville on Oct. 23, have lost in the Class 6A state final the past two years.

Senior defensive lineman Rodney Haywood didn’t know what to make of Seals’ enthusiasm when he first met him as a freshman.

“After the first couple of days, it was fun to have that kind of energy around us every day,” Haywood said. “He gives us a lot of motivation to get better each day.”

“He’s always got that motor running,” Goldblatt said. “He came out that first day and he was yelling and screaming. If someone needed a lift, he was there. He’s a vital part to our enthusiasm and level of focus during practice. I’ve seen Aaron at all levels from happy to mad. When things aren’t going well, he lets it be known. He gets it corrected and gets our heads on straight. He’s a competitor like the rest of us.”

Seals, who wants to be a geologist, said he sees his autism as a gift not a disability. He plans to go to a community college first before transferring.

As much as he has enjoyed the success, the best part for Seals is the bonds.

“The best part has been developing the brotherhood feeling and growing together as teammates,” Seals said.