You are at:Home»Current in Fishers»HSE grad’s dream leads her to compete for national pageant title 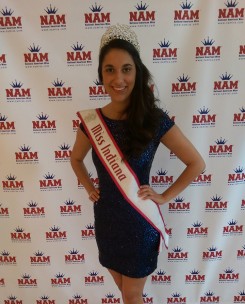 Many of us have dreams we hope to one day achieve, but not all of us are fortunate enough to achieve them. For 2013 Hamilton Southeastern graduate and Fishers resident Megan Billman, her opportunity to achieve that dream was coming to an end. Fortunately, through patience and perseverance, Billman achieved her dream last June in becoming Miss Indiana in the North American Miss pageant. Now she’s taking that dream to an even higher level as she sets her sights on the NAM national title.

For five long years, Billman continued to compete in the NAM competition at various levels before she achieved the NAM Miss Indiana rank.

“I started competing back about five years ago with National American Miss,” Billman said. “I originally started because it was my dream to get the crown and be the title holder. After five years, I was getting really nervous that I would never get the crown. There were so many good girls.”

Her persistence finally paid off when she received her crown in June.

“It was definitely really bittersweet. To hear my name called when I saw friends that I’ve made over the last five years; it was definitely awesome to realize that I could achieve one of my biggest dreams in life,” she said.

But the path of the pageant is not an easy one. As NAM Miss Indiana, Billman is constantly on the move, yet still manages to juggle a job and pursue her bachelor’s degree as a junior majoring in sales management at Purdue.

“My suitcase is always out because I’m essentially living at my apartment from Monday night to either Thursday or Friday, then I’m on the road again. I’m traveling to other states or community service events. During the week I’m going to school. I’m a full-time student. I’m also working on average about 35 hours a week. It’s definitely a busy life,” she said.

On top of all that, Billamn is also active in her student council and student government. But despite her busy schedule, she said she’s doing exactly what she intended to.

“It’s a crazy ride but there are so many things I wanted to do in life. I wanted to be on student council and I wanted to get my degree and I want to work and be able to provide for myself,” she said.

One of her main priorities was to show how grateful she was for the opportunity to not only follow and achieve her dream, but serve the community as well.

“I really tried to [show]how humble I am and how gracious I am for this experience and that it wasn’t about getting in the news or the media,” she said. “It was really how I could help the community and how I can touch the community. Even growing up in high school I loved going to the city council meetings and speaking with schools and different organizations. I really wanted them to know that that was important to me; that Fishers was home for me.”

The pressure of the pageant weighs heavily on Billman, but even with all the attention, distraction and obligation of the crown, she said it won’t change who she really is.

“I’m just trying to express that message out that whether I receive the crown or not, it’s not going to change me. I’m still going to be doing the community service as I have been and still be visiting schools and still trying to live life as Megan. Whether I’m the national queen or Miss Indiana I think it’s important to stay true to yourself and just expressing that you are genuine,” Billman said.

While her family has been supporting her every step of the way, Billman has also been gaining support from the community to aid in her journey to the nationals. So far, several businesses have contributed to Billman’s journey.

Billman will make her way to Anaheim, Ca. to compete for the national crown over the week of Thanksgiving. Those interested in donating to aid in Billman’s journey can visit gofundme.com/x39uzk.