You are at:Home»Current in Westfield»Westfield Smashburger first to open in Indiana 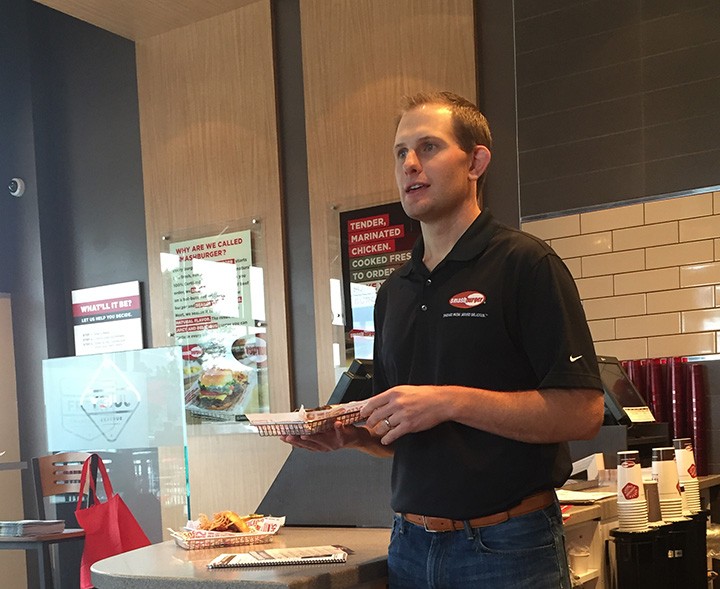 Of more than 300 Smashburger restaurants worldwide spanning across 38 states and eight countries, Indiana finally has one of its own in Cool Creek Commons of Westfield.

The company began in 2007, and according to Adam Passarelli, senior director of marketing, the burger restaurant has been growing very quickly.

Passarelli explained he believes the five differentials of Smashburger have helped with excelling the restaurant compared to other burger chains. The five focuses are quality ingredients, the smashing process of the burgers, menu variety, the made-to-order feel and the locality of each Smashburger.

On the walls of the Westfield Smashburger, customers will find pictures and canvases depicting Indiana’s landmarks and universities.

“We are very excited to showcase a product from the state,” Passarelli said.

In addition to the various kinds of burgers, sandwiches and salads, Smashburger will soon offer beer as well, although they are currently in the permit stages.

Co-owner Amit Patel said he is excited to bring a brand he knows to Westfield.

“I actually came across the brand while traveling and came back home and realized it wasn’t in the area,” Patel said. “I thought to myself that it would be a good opportunity to bring Smashburger here primarily because it’s not here already. It’s great to bring a brand that’s already successful elsewhere to Indiana.”

In addition to offering different varieties of burgers, including chicken and black bean burgers, Smashburger has partnered with Haagen-Dazs ice cream for its milkshakes.

“My favorite part of Smashburger is we talk about premium ingredients and our partnership with Haagen-Dazs brings that to life,” Passarelli said.