You are at:Home»Current in Westfield»Westfield artist Hopkins’ work on display at juried show 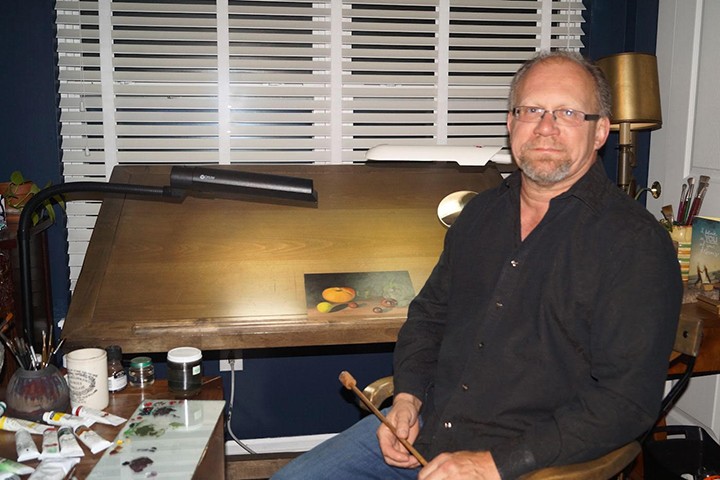 Westfield artist Al Hopkins took art in high school, but that was it for his formal training.

“Other than that I just had blue-collar jobs all through life and painted on the side,” said the 55-year-old Hopkins, who works at FedEx Ground. “I couldn’t let the mortgage rest on [being an artist].”

His entry is a 6-inch by 9-inch oil painting on board titled, “Limes and Lemons.”

“I was just lucky I was in Indiana, so it will be easy for me to go to the show and drop off my painting,” he said.

The focus in the jurying process will be to select paintings that display the highest quality in draftsmanship, color, and composition, emphasizing a diversity in representational style and subject matter. Awards will total $11,500, including a $4,000 Best In Show award.

Hopkins is one of just seven artists from Indiana selected into the show.

“This is the first attempt to get in and I got in,” he said. “I saw a show I think in 1994, and I saw an Indiana artist named Frederik Ebbesen Grue (who died in 1995). He did similar work, and I was struck by it. It set me off in a direction of doing traditional still life in a very realistic style.”

“I’ve been in show twice over the years,” he said.

Prior to this recent painting, he had taken a 10-year break from painting because of family commitments.

“My last painting before that was in 2005 for Indiana Heritage Arts exhibit in Nashville (Ind.),” he said.

For more information about the gallery or exhibit, visit www.oilpaintersofamerica.com.