You are at:Home»Current in Fishers»Fishers resident achieves success in speech contest 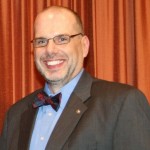 Months of preparation paid off for Gil Michelini as the Fishers resident came home with a top-10 finish from the 2015 Toastmasters International Speech Contest last month in Las Vegas.

Just to make it to that level of competition, Michelini had to win his way through club, area and district contests that first began in Fishers in January. The international contest included 96 district winners, separated into 10 semifinal pools.

“It was intense,” Michelini said. “The eight other people I was competing against were from all over the world and a good representation of some of the best speakers in the world. It was a total shock to me that I won.”

“The speech I gave in the semifinal round, it just seemed really natural coming out,” he said. “It really seemed to make a connection with the audience. That I think is what really helped me win.”

His speech was titled “Love Overcomes Fear” and told the story of Michelini’s reluctant relationship with his daughter Anna’s husband and how he came to accept him, tattoos and all.

Individual placements and judges’ scoring in the championship round was not announced outside the top-three finishers, ending up with Michelini in a group of speakers tied for fourth place.

“Especially in the final round, the three gentlemen that placed had speeches that really made connections with the audience,” he said. “Mine didn’t as much, but it was my first time, I learned a lot and I’ll know more when I go back next time.”

After his first attempt at speech competitions wound up leading him to the Toastmasters international finals, Michelini is already anticipating the start of next year’s contest.

“I learned so much in the last eight months leading up to the (international) contest and I look forward to the chance to try it again,” he said.