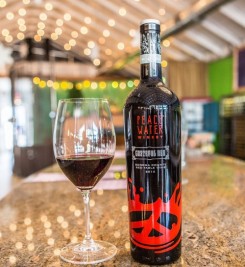 The Indy International Wine Competition – featuring almost 2,200 wines from around the 11 countries and 40 states – is the largest of its kind in the country. And, this year it saw a local winery take home top honors as Carmel’s Peace Water Winery’s 2012 Grateful Red earned Red Wine of the Year.

“We knew that we were making some really great wines, however, a brand new winery has never won an award of that stature, so clearly it was unexpected,” said Scott Burton, owner of the winery. “All credit goes to our outstanding winemaker, Brian Brakesman, who literally grew up in the vineyards of Napa Valley and has been making wine ever since.”

The 2012 Grateful Red is a blend of 75 percent Cabernet Franc and 25 percent Malbec. The wine was aged for 18 months in barrels made of French Oak and then blended and bottled at the winery’s facility in Napa Valley.

The 2012 Grateful Red wasn’t the only wine Peace Water entered in the competition. Eleven wines were entered, with 10 winning medals in their respective classes – including a gold for the 2012 Nirvana.

“This was the first time we had the chance to have them all evaluated and blind tasted by an independent panel,” Burton said.

But the winery isn’t resting on its laurels. Two new releases are now available – the 2014 Bliss Sauvignon Blanc and the 2007 Howell Mountain Late Harvest Zinfandel.

“Our 2013 Bliss was a huge hit and was named best white wine at the World Wine Tasting Championship,” Burton said. “This year we produced 275 cases with grapes from the same vineyard. It is already flying off the shelves.”

Peace Water now also offers a patio featuring local artists playing live music from 6 to 10 p.m. on Fridays and Saturdays. Patrons can “BYOF” – bring your own food – or order from restaurants in the area and have it delivered right to the table.