You are at:Home»Night & Day»Bonnett returns to stage at Civic Theatre: Carmel native has lead role in Little Women, the Broadway Musical 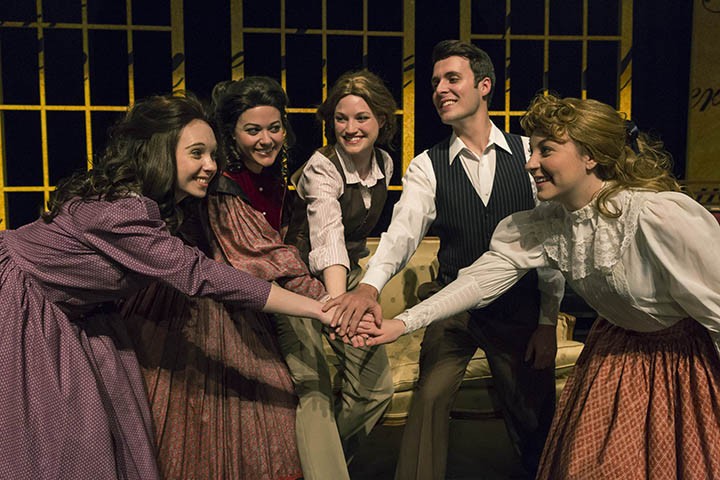 Carmel’s Julia Bonnett is making a return to musical theater playing the lead role in one of her favorite shows as she’ll portray Jo March in the Civic Theatre’s upcoming production of Little Women, The Broadway Musical.

The show opens Friday, Sept. 11, and runs through Saturday, Sept. 26, at the Tarkington.

The chance to play a character special to her in one of her favorite shows was enough to make Bonnett break what had become a two-year hiatus from performing arts.

“This is the first show I’ve done in two years. I haven’t done a show in a long time,” the 2009 Carmel High School grad said. “I lived in New York for a year and didn’t perform out there. I worked for NBC in their video archives, which was really cool, but my lifestyle didn’t really lend to any performing. I’ve been back in Carmel for over a year now and I just wanted to get settled again before I did anything.”

When she heard the Civic Theatre decided on Little Women, the Broadway Musical, Bonnett decided she was plenty settled.

“Little Women is one of my favorite shows because the music is so beautiful. I don’t think it’s a show that a lot of people know outside of the musical theater community, but the music is gorgeous,” Bonnett said. “It’s some of my favorite music, so when I heard the Civic was doing it I just had to audition.”

She landed the lead role, one originated by Tony winner Sutton Foster — Bonnett’s idol in the profession who also originated another role special to Bonnett.

“Actually, the opening show here at the Tarkinton for Civic was the Drowsy Chaperone and I played Janet Van De Graaf — Sutton Foster originated that role of Janet and she also originated the role of Jo in Little Women, which is kind of cool,” Bonnett said. “She’s really what made this show so successful, just because she’s amazing. I’m a big fangirl of Sutton Foster.”

“It’s the type of character that is so different and is so against the norm of that time. Her sisters are getting married, trying to be in society and Jo is not interested in any of that,” Bonnett said. “All she wants is to write her stories, become a famous writer and stay with her sisters forever. The story is essentially about growing up and realizing that your dreams don’t necessarily come true, but it’s the path that matters.

“For me personally, this character is an important figure because she’s a feminist and she’s a great example for girls of any age who are different than what’s expected,” she added. “I love the character. I think she’s fantastic. She’s a little spastic and a little defiant, but I think there’s a depth to her that we really get to see in the second act especially.”

Jo March is Bonnett’s fourth role in a Civic Theatre show. Most recently she portrayed Cinderella in the 2013 production of Into the Woods.

“She’s kind of a kooky, weird Cinderella in Into the Woods, but she was honestly one of my favorite characters I’ve ever played,” Bonnett said.

Active in Carmel High School’s performing arts during her time there, Bonnett was in top show choir the Ambassadors and starred in a number of CHS stage productions.

“My senior year we did Singin’ in the Rain and I played Lina Lamont. She has this terrible voice,” Bonnett said. “She was a huge silent film star but she couldn’t sing and her speaking voice was appalling. She was such a fun character to play. She was one that didn’t have a lot of depth, but it was fun to kind of go crazy and it was definitely outside of my comfort zone.”

Now Bonnett has returned to her comfort zone just by making a musical theater comeback at the Tarkington this month. For tickets or more information on “Little Women, the Broadway Musical,” visit civictheatre.org.