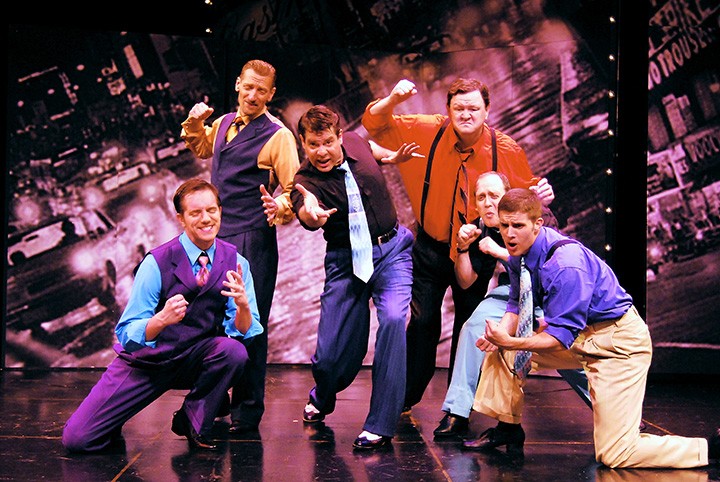 “Guys and Dolls” is just one of many favorites to hit the Beef & Boards stage in the new 2016 season. (Submitted photo)

Beef & Boards Dinner Theatre’s 2016 Season celebrates women – from princesses to wives to nuns – and what we love about them. With two new shows to the Beef & Boards stage, the 43rd season takes us from the church basement into the woods, to an enchanted castle and the New York City streets.

It all kicks off Dec. 29 with the return of “Run for Your Wife,” the funniest show ever performed at Beef & Boards. In this uncanny comedy, a cab driver manages to maintain two marriages – keeping each wife a secret from the other – until one mishap leads to an unraveling of his precise schedule. His double life is in danger of being revealed as complications and hilarious situations pile up faster than he can handle them. This fast-paced farce is on stage through Feb. 7 and is rated PG-13 for adult humor.

Opening Feb. 11 is the first of two new shows in 2016, “Sister Act.” Based on the hit movie starring Whoopi Goldberg, this musical follows disco diva Deloris Van Cartier who witnesses a murder and is put in protective custody – in a convent! Disguised as a nun, Deloris breathes new life into the church with her disco moves and singing talent, but blows her cover in the process. Nominated for five Tony Awards and on stage through March 26, this show is rated PG.

A sure bet for fun, “Guys and Dolls” opens March 31. Set in New York City, this odds-on favorite follows gambler Nathan Detroit, who is trying to set up the biggest craps game in town while dodging the authorities and his girlfriend of 14 years, nightclub performer Adelaide, who wants to get married. Nathan turns to fellow gambler Sky Masterson for the dough, but Sky ends up chasing the straight-laced missionary Sarah Brown. This five-time Tony Award winner features the songs “Luck be a Lady,” “Guys and Dolls” and “Sit Down You’re Rockin’ the Boat.” On stage through May 15, “Guys and Dolls” is rated PG.

Disney’s magical musical “Beauty and the Beast” opens May 19 as the 2016 Family Show at Beef & Boards. Belle yearns for more than her simple life in a provincial town. When her father disappears, Belle bargains with the Beast who imprisoned him and takes his place in the Beast’s enchanted castle. As she spends more time with the Beast, Belle discovers his life without love is the greatest prison of all. Will their love bloom before it’s too late in this tale as old as time? With $10 discounts for all children ages 3-15, “Beauty and the Beast” is on stage through July 10 and is rated G.

Then cool off in the basement during the summer as the “Church Basement Ladies” returns on July 14. This is the show that got this laugh-a-minute series started! Set in Minnesota in 1965, the times are changing quickly for the Lutheran ladies who keep things cooking at their church. With heaping helpings of laughs, this show is equal parts silly and sweet. On stage through Aug. 21, “Church Basement Ladies” is rated PG.

Ladies who love life and learn to laugh at the changes it brings are celebrated in the musical parody
“Menopause the Musical,” opening Aug. 25. Changing perspectives about the “silent passage,” this lighthearted show is staged to classic tunes from the ‘60s, ‘70s and ‘80s. Four women from different walks of life meet in a department store and find they have much more in common than they would have thought. This hilarious celebration of women and “the change” is on stage through Oct. 2 and is rated PG-13 for adult humor.

Fall takes audiences “Into the Woods” starting Oct. 6 for the Beef & Boards debut of the Stephen Sondheim musical. Classic fairy tales all converge in the woods, including a baker and his wife who wish to have a child, Cinderella who wishes to attend the King’s Festival, and Jack who wishes his cow would give milk. Their wishes may come true – but happily ever after comes at a price. This Tony Award winner was made famous by the recent Disney film and is on stage through Nov. 20. “Into the Woods” is rated PG-13.

The holiday season is celebrated with the theatre’s original production, “A Beef & Boards Christmas,” opening Nov. 25 and featuring beautiful costumes, heartwarming songs, dazzling dancing and even Santa himself. A tradition at Beef &Boards for more than 20 years, and perfect for the entire family, this seasonal celebration is on stage through Dec. 23.

Also returning in 2016 is Beef & Boards’ one-hour adaptation of the Charles Dickens classic, “A Christmas Carol,” on stage for select performances Dec. 5 through 19. Enhanced with holiday carols, this iconic tale of miserly Ebenezer Scrooge who is given a second chance is the ideal way to enjoy the holidays.

The Pyramid Players also announce their 2016 Live Theatre for Kids series. Designed to entertain children of any age, these shows are a great way to introduce preschoolers to live theatre. Youngsters also have the opportunity to meet the cast after the show for pictures and autographs.

Junie B. Jones comes to the Beef & Boards stage for the first time as the first Pyramid Players production of 2016. Junie B. is embarking on her first day of first grade and finds it brings some challenges she didn’t expect. But with new friends, a kickball tournament and a “top-secret” journal, she discovers first grade has never been more exciting. On stage Feb. 19 through March 19.

Hans Christian Andersen’s fairy tale The Little Mermaid is the fall production, on stage Oct. 14 through Nov. 12. This classic fairy tale tells of a mermaid who wants to seek adventures beyond the ocean. When she rescues a drowning prince and falls in love, she bargains with a sea witch so she can become human, too.

For tickets and more, visit beefandboards.com.