You are at:Home»Current in Carmel»Carmel Community»Carmel couple sells home, belongings for trip of a lifetime 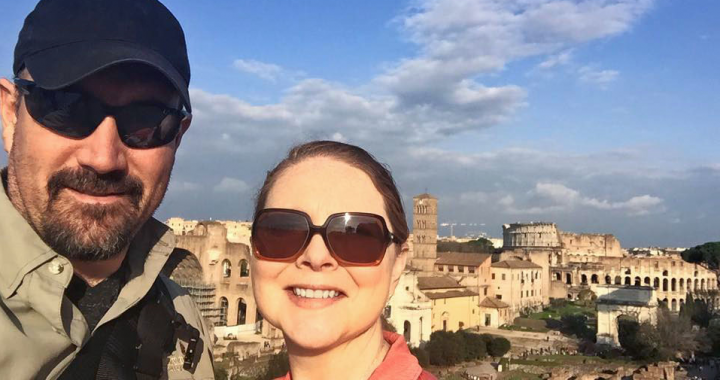 Steve and Angela Standifer recently visited Italy, which will be the first stop on their trip. (submitted photo)

Carmel residents Angela and Steve Standifer always dreamt of traveling the world during their retirement. After a recent death in the family, the couple decided not to wait to begin their trip of a lifetime.

This is no ordinary vacation, though. They have decided to live as nomads bouncing from place to place. Angela quit her job, and the couple has sold most of their possessions.

“We decided to sell everything—the house, all of our furniture and my car. We’re putting a few things in storage, and we’re going to go see the world,” said Angela Standifer.

The Standifers visited Italy in March, and Steve’s grandmother passed away within a few days of their return home. During a long trek to New Mexico and back for the funeral, the couple had plenty of time to reflect on their life goals.

“One of the things his grandmother regretted at the end of her life was that she and his grandfather had never really traveled anywhere,” Angela said. “They had planned to go see Alaska and they never got there.”

With that that in mind, the couple began planning. Their trip will begin Aug. 24 when they head to Italy and continue through Europe, Southeast Asia and possibly New Zealand. The couple has decided to take things as they come and live in the moment. The couple will blog throughout their experience at www.beyondthedoorway.com.

“We have our lodging set up in Italy. Then we’ll work on our plans for the next phase while we’re there,” Angela said. “If we decide we like some place we may decide to stay longer. Or, we may change plans to go somewhere else.”

The couple has four adult children ranging in age from 20 to 28 years old.

“They’re actually our biggest cheerleaders,” Angela said. “We traveled a lot with them around the United States when they were growing up, so they love to travel. They’re pretty adventurous like we are. Of course, they’re going to come and visit us.”

The Standifers have decided to live with no regrets.

“I don’t know that anybody on their deathbed would regret having taking that trip they wanted to take,” Angela said. “I know many people would never say I wish I would have worked more hours.”