You are at:Home»Night & Day»‘SNL’ costume director returns home for fundraiser 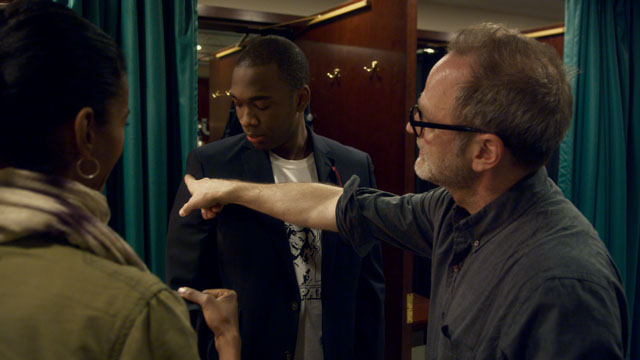 Tom Broecker, a Carmel native, returns this month to premiere a documentary film. Broecker with Jay Pharoah on set. (Photo
courtesy of LFNY!)

Tom Broecker has a unique view into the longevity of “Saturday Night Live.”

For more than 20 years, the 1980 Carmel High School graduate has served as the show’s costume designer.

Broecker will return to Carmel to introduce “Live From New York!” at 7 p.m. on Aug. 22 at Flix Brewhouse, 2206 E. 116th St. The cost for the event, which serves as a fundraiser for Actors Theatre of Indiana, is $35 per person, including dinner. Alcoholic beverages will be available for purchase separately.

Broecker serves as the documentary’s executive producer along with JL Pomeroy, founder of BehindTheLine Productions.

The idea was something Broecker brought up to Pomeroy over lunch as they were discussing the comedy show’s 40th anniversary this year.

“We flushed it out over lunch,” Broecker said.

Then Broecker and Pomeroy pitched it to “SNL” producer Lorne Michaels and NBC officials about the behind-the-scenes look.

“Once we got their blessing to do it, we ran with it and 11 months later we had a documentary,” Broecker said. “It’s a different take on the show. It’s not a clips show. It’s a look at how the show has been a reflector of the world we live it at any given moment.”

The show has always taken on societal and political issues of the times.

Broecker said his brother, John Terry, is involved with Actors Theatre of Indiana so he suggested a fundraiser with the movie might help the organization.

The 82-minute documentary had its premiere at the Tribeca Film Festival in April.

Broecker also served as costume director for “30 Rock” and had a recurring role of Lee, the angry costume designer on that show.

“I started off as an actor and dancer,” said Broecker, who graduated from Wabash College and Yale School of Drama.

Broecker has been nominated for an Emmy for outstanding costumes six times for “SNL,” winning in 2014. He never envisioned staying 20 years at “SNL.”

“It’s very exciting. It’s new every week,” Broecker said. “It’s an amazing job. You don’t get a lot of design opportunity in television the last 20 years. A lot of these shows come and go. I’ve been with some shows that have lasted three episodes and they pull the plug. It’s nice to have a steady job, it’s kind of unheard of. That’s another reason for doing the documentary. It’s sort of a love letter to New York and to the show.”

To purchase tickets for the fundraiser, visit atistage.org.