You are at:Home»Current in Zionsville»Bloor Lane residents push for 6-foot sidewalk 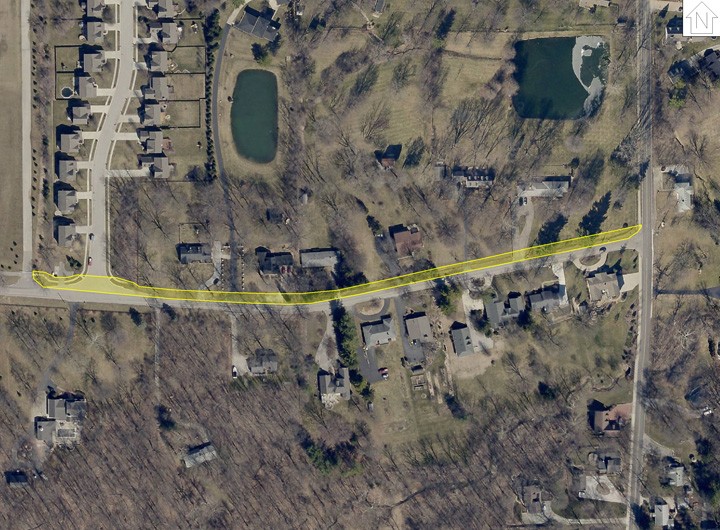 The sidewalk will run along Bloor Lane from Bloor Woods Court to Mulberry Street. (submitted image)

The Zionsville Town Council heard a passionate plea from residents of Bloor Lane regarding the design of an upcoming sidewalk project during its regular meeting Aug. 3 at Zionsville Town Hall.

John Scott spoke to the council on behalf of his Bloor Lane neighbors, many of whom were in attendance, and presented council members with copies of a petition in strong support for one of the two sidewalk plans proposed.

Scott said that he received a letter from HWC Engineering outlining two options: the first being a six-foot wide sidewalk directly adjacent to Bloor Lane and a second possibility featuring an eight-foot wide pathway that meanders within the right-of-way.

“I’m glad to say the property owners on both Bloor Lane and in Bloor Woods are standing united and enthusiastic in support of option number one,” Scott said. “We’re all very excited and see this as an absolute enhancement to our pristine and serene lane and community and look forward to using it for decades to come.”

He also noted that the property owners “stand united in opposition” to the other option, which he said would “meander straight through the middle of front yards of the residents on the north side.”

Lance Lantz, Zionsville superintendent of street/storm water services, said that while those are the two plans under consideration now, there is the option of a hybrid plan. He’s been in contact with the street’s property owners to set up site meetings showing how the area would be affected by each proposal.

Comments from council member Tom Schuler drew a round of applause from the Bloor Lane residents in the audience.

“One of the reasons you have pathways is to connect dots on a map … Mulberry already connects to Bloor and to the high school there, so it seems like the only purpose a Bloor road pathway would serve would be to serve the people on Bloor road,” Schuler said. “There are alternative connections that already exist. If we’re going to spend money here, I always thought the idea was to make people on Bloor happy.”

Lantz had an original internal goal to finalize plans by September or October, with construction beginning sometime next year, but said there’s no hard deadline in place.

“We want to keep these moving along, but we don’t want to rush them,” he said. “If it takes longer, it certainly takes longer.”