You are at:Home»Current in Zionsville»One Tool forms interesting artwork 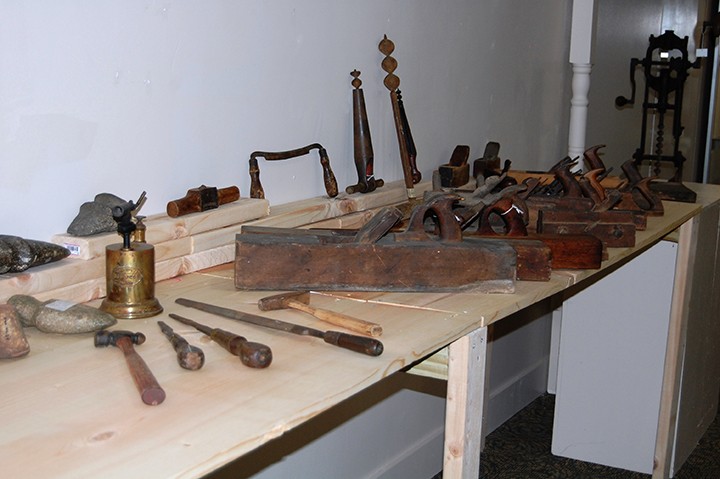 Some of the tools on display now at the SullivanMunce. (Photo by Heather Lusk)

Art created using a single tool – and sometimes an unexpected one – will be on display at the SullivanMunce Cultural Center as part of the One Tool / One Artwork Exhibition. A felting needle, straw and an X-acto knife are among the tools used to create these pieces of art on the medium of the artist’s choice.

Accompanying the exhibit is a display of roughly 100 garden and homestead tools from the P.H. Sullivan collection.

Fourteen pieces of art by professional and emerging artists will be display through Aug. 29. A special reception for the artists will be held on Aug. 7 from 6 – 8 p.m. All of the pieces are available for purchase.

The artists are all from central Indiana including Zionsville, Indianapolis, Carmel, Avon and Fishers. Other tools used to create these original pieces of art are a Dremel tool on a piece of wood, a gesture drawing using an ink stopper, and pencil used to manipulate paint to create a drawing.

The tools from the museum’s collection have been on display since mid-June to coincide with the Gardens of Zionsville Tour, which took place on June 20. This is the first time these items have been for public viewing as a collection.

“We haven’t had the tools on display. We’re always combing through our collection trying to come up with exhibit ideas,” said Cynthia Young, SullivanMunce executive director.

The tools vary from saws and planers to a bottle capper and ice tongs. Some of items are hand tools and drill bits, and others are used for farming or the household. According to Young, the items were donated to the museum and museum staff are sometimes not told the purpose of the tools. For unfamiliar items, some of it is a guessing game while other times visitors to the museum have recognized the items and explained the tools’ purpose.

The idea to showcase the collection started when David Ruffer, past interim executive director of the SullivanMunce, decided to pull some of the tools from the museum’s archives for display. With several of the items being gardening tools, the exhibit coincided nicely with the garden tour and from that point Young devised the idea for a tool theme that would also work for artists in the art gallery.

“We try to wrap things together so they make sense,” she said.

One of Young’s pieces will be part of the One Tool / One Artwork Exhibit, and it’s the first time that an exhibit with this theme has been featured at the SullivanMunce. “It opens people’s minds up to other ways you can create art,” Young said. “It doesn’t have to be traditional tools.”

The next exhibit at the SullivanMunce will be a collection of Susan Easton Burns’ nature paintings opening on Sept. 11.

Artist Gary Schmitt used a felting needle to create “Plier” out of wool.