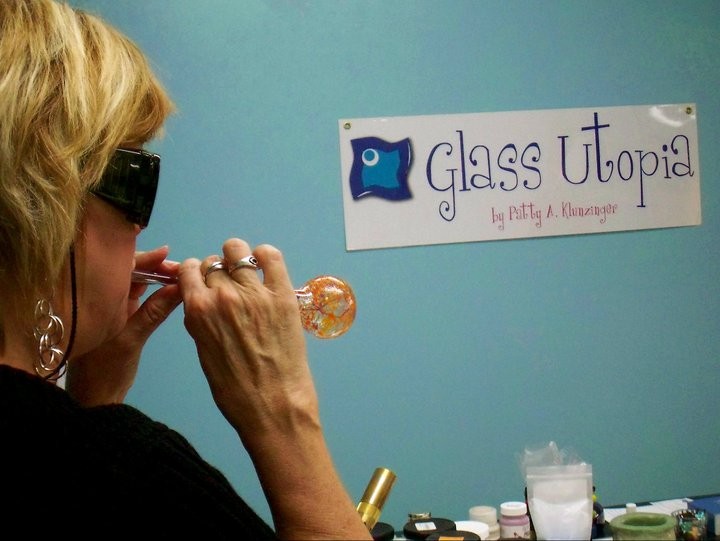 Patty Klunzinger blows glass. She will be hosting a blowing demo at the July 10 event. (Submitted photo)

Fishers residents may be running to crawl when the first annual Arts Crawl takes place at the Nickel Plate District on July 10 at 6 p.m.

Approximately 25 local businesses have come together with local artists to create a free event showcasing some of Fishers’ talented local artists, according to Tracy Gitter, who owns participating gallery, Gallery 116, and who helped coordinate the event.

Gitter said the Arts Crawl will feature not only paintings and sculpture, but also mixed media, performance art (such as musicians and bands), hair art and more.

“It’s going to not just be art that you just look at, but art that you can be involved with and act with,” Gitter said.

According to Gitter, Gallery 116 will even be hosting glass blower Patty Klunzinger from Glass Utopia. Klunzinger will not only have some premade art to display, but will be giving demos throughout the event as well.

The self-guided event will even have a beer and wine garden, according to Gitter.

The first of its kind in Fishers, the Arts Crawl was conceived to show off local artists in tandem with businesses supporting the event.

Gitter said the hope is for attendees to realize they don’t have to go far to find beautiful art – it’s available right near home at businesses like her own.

“Not only does it get people into the downtown Fishers area to see all the businesses, but it also helps to promote my business and the artists I carry-year round,” Gitter said.

She also hopes the Arts Crawl will help boost the local economy by shopping locally.

“They’ll see what’s all in their backyard instead of going out of their district,” Gitter said.

For more information about the Arts Crawl, including a downloadable map of the area and participating businesses, visit http://www.fishers.in.us/index.aspx?NID=619&ART=1959&ADMIN=1.