You are at:Home»Current in Fishers»Cancer-free boy gives back 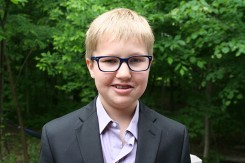 At the young age of 3, Luke Andritsch was diagnosed with Acute Lymphoblastic Leukemia at Riley Hospital.

He began playing the drums, because they helped make him feel better on his worse days.

Luke continued his treatment for three years and come July, will be cancer-free for five years.

Although Luke’s battle with cancer is over, he still feels for the kids at Riley who have not beaten cancer yet. That led way to his creation of “rhythm pax”, a canvas bag full of a variety of different ways to create music because he wanted to share the same feeling he had with other kids.

“He liked the feeling he had when he played drums, and he wanted other kids to feel good and not feel bad about going to Riley, but use it as a place of healing and a place for love instead,” Todd Andritsch, Luke’s father, said. “He just likes sharing his experience. Kids can see someone on the other side of cancer that isn’t feeling bad anymore. It’s a way to see the light at the end of that tunnel.”

Luke distributes the rhythm pax quarterly at Riley, and nurses hand them out to the sick children between his visits. For developing his rhythm pax and distributing more than 500 to kids in need, Luke was nominated for the National Kohl’s Cares Scholarship Program. The scholarship will give Luke $10,000, or $2,500 a year, when he goes to college.

Currently, as a sixth grader at Fall Creek Intermediate in Fishers, Luke is debating many things he might do at college including studying to be an engineer, a doctor or a race car driver.