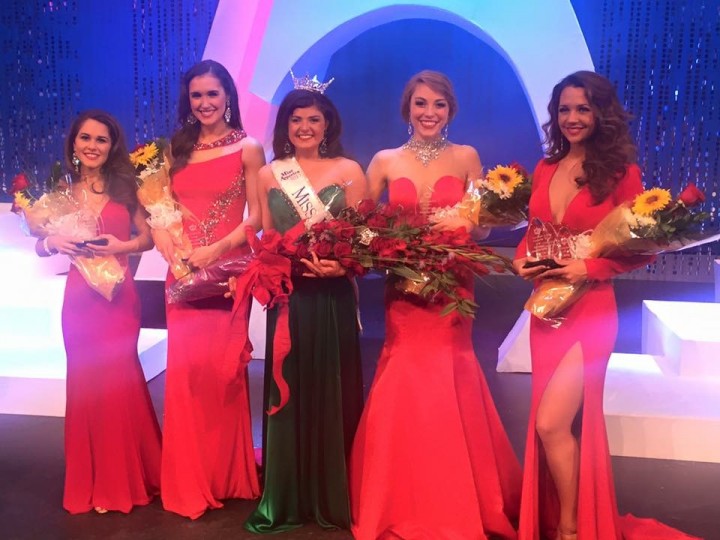 A standing-room-only crowd was present to see Morgan Jackson crowned the 2015 Miss Indiana at the Zionsville Performing Arts Center on June 20. Jackson will compete for the Miss America crown in Atlantic City in September.

The evening opened with a big performance celebrating 75 years of the Miss Indiana pageant, with the contestants in red and white dresses and the current title holders wearing blue. Sixty-four women took the stage for introductions before host Brad Brown whittled each group of contestants down to 11.

Among the finalists for Outstanding Teen were Zionsville residents Gracen Stanczykiewicz and Samantha Robbins.

Twenty “Forevers” – women who have previously held the title of Miss Indiana – were introduced and assisted with hosting duties for the evening including the 1951 Miss Indiana Carol Mitchell.

Narrowing down the finalists to a top five for each crown, the elimination came down to the interview question. Finalists for Miss Indiana randomly selected pre-written questions covering topics like gun control, medical marijuana and whether stories in the Bible should be taken literally.

First runner-up Rose McClimans was asked her thoughts about RFRA. “Freedom of speech is your freedom to be who you are,” she said. McClimans is a recent graduate of Notre Dame and holds the local title of Miss Collegiate North.

Audrey Fergueson of Evansville was crowned Miss Indiana Outstanding Teen. She had been named Miss Central Indiana’s Outstanding Teen. The teen first runner-up was Carmel-resident Shelby Kay Everitt. A visibly stunned Ferguesen mouthed “Thank you so much,” to the audience as she walked the runway.

Jackson, a student at the University of Louisville, has the local title of Miss Harvest Homecoming. She performed a lyrical ballet to the song “All is Well” for her talent.

Fergueson will compete for the title of Miss America’s Outstanding Teen in Orlando in August.