You are at:Home»Current in Zionsville»Akard Hardware event to support Alzheimer’s Association 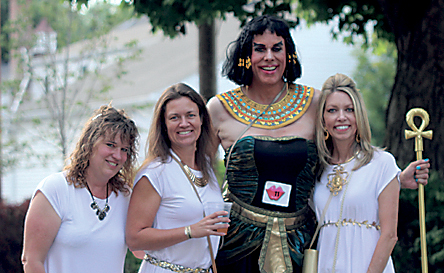 In addition to extra sunlight, the longest day of the year will bring an Alzheimer’s disease awareness fundraiser to Zionsville’s Akard True Value Hardware.

June 21 doubles as Father’s Day and the summer solstice, and Akard Hardware co-owner Leigh Ann Akard said that the store wants to join the Alzheimer’s Association in taking a day to think back on memories and why they matter.

“[Alzheimer’s] is a horrible disease that once you get the diagnosis there is no miraculous cure or remission. When you get it there’s not a whole lot of hope in the end,” said Akard, who lost her grandfather to the disease.

The Longest Day fundraiser on June 21 will raise money for the Z’Sparkle Party Drag Race to End Alzheimer’s taking place on Main Street in August.

The hardware store opens at 10 a.m. and closes at 6 p.m. The fundraising event will include a daylong grill demo, and a fundraising bucket sale will take place. Customers can buy a bucket for $5 and 100 percent of those funds will go to the Alzheimer’s Association. Anything that fits in the bucket from Akard’s will then be 20 percent off.

A special event focused solely on Alzheimer’s will bring the day to a close.

“As light fades from the sky, we will light sparklers,” Akard said. “The time it takes the sparkler to burn, which is 67 seconds, another person is diagnosed with Alzheimer’s.”

The fundraiser will bring in money to continue the August drag race, which has raised $150,000 for the Alzheimer’s Association since it began six years ago.

“Alzheimer’s is just such a devastating disease that there is no good ending to, and this all goes toward the research,” Akard said. “It’s something to honor my family, and it’s one of those passions to raise awareness and take action.”