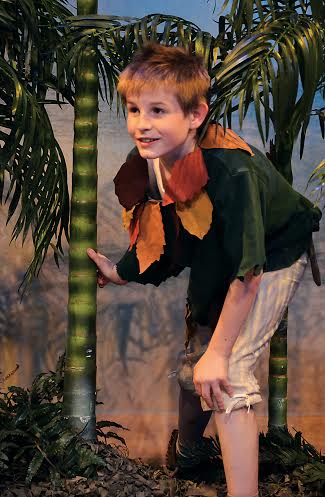 For Colin McCabe, performing isn’t as much about the spotlight as it is about the time spent with his cast mates – both on and off the stage.

The third-grader at Our Lady of Grace in Noblesville is making his Beef & Boards Dinner Theatre debut as Dweasle, a Lost Boy in “Peter Pan.”

“I wanted to do ‘Peter Pan’ because it would be a great acting experience for me, and I could make new friends,” McCabe said. “I like performing because I get to make new friends.”

By now, even at only 9 years old, he should have plenty of them.

The family musical at Beef & Boards brings the total of productions listed on his resume to 10. Performing since he was a 4-year-old, he’s been seen in shows at The Artist Studio, Civic Theatre and Theatre on the Square, to name a few. Of course, each has its challenge.

“The hardest part is remembering all the lines,” McCabe said.

Still, it’s all about the friendships he’ll take with him long after the curtain goes down.

“My favorite thing about ‘Peter Pan’ are my friends,” he said. “I get to hang out with them on breaks.”

While he’s been developing his acting chops most of his life, he also has another potential career in mind.

“I have wanted to be a scientist since I got my first science kit in preschool,” McCabe said. “But I love to act, too. So I don’t know yet!”