You are at:Home»Current in Westfield»Carey Ridge students help classmate in need 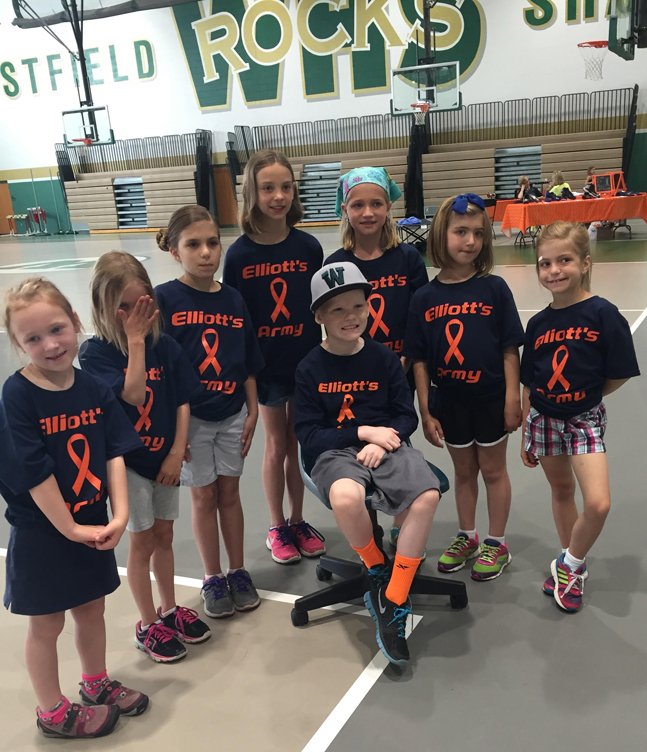 Parents, students and residents alike gathered at the Westfield High School indoor MPIF track on May 30 to support a boy well-loved in the Westfield and Carey Ridge Elementary School community.

Elliott Ogle, a soon-to-be fourth grader at Carey Ridge Elementary, was diagnosed with Acute Lymphoblastic Leukemia in November 2014. A few girls from Carey Ridge got together to host a fundraiser for Ogle in hopes of raising money for his treatments.

Ranging from ages 5 to 11, the girls have held more than one fundraiser to help the community, such as lemonade stands or selling artwork. Creating a race as a fundraiser never seemed like an obstacle to them, and they organized it to help raise money for Ogle.

While participants were walking and running in the MPIF, a silent auction was going on as well as doughnut and fruit sales. Some of the items in the silent auction were signed Colts cleats that were worn during a playoff game donated by the Colts players, handmade jewelry, signed Pacers jerseys and more.

Just from the online registration, the group raised more than $1,300 for Ogle.

April Fawcett, the mother of Loren and Ellie who helped organize the event, said that there were extra donations, donations from Girl Scout cookie sales and all kinds of different sales over the past year.

“We’ve just had some really generous people,” she said.

Don Hahn, father of Anneliese and Emmeline, said the girls have never kept a nickel from all their generous fundraisers.

“It never occurred to them to think hosting a race was impossible,” Hahn stated. “These girls make things happen. So with the guidance of us and their parents, they came up with the idea to support (Elliott).”