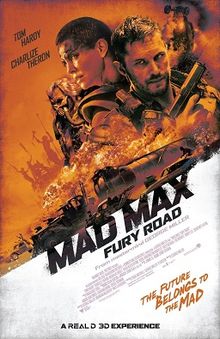 At some point in your movie going experience you may have heard, or even said yourself, “That movie was all style and no substance.” The problem with that though is that the style of a film is a large part of the substance. The way it’s shot, the editing, the color, the sound; all of that is carefully planned to add to the themes and story. You don’t need heaps of dialogue to tell a story or convey emotion and that’s what Mad Max: Fury Road is all about. Well, that and explosions.

Mad Max: Fury Road takes place in a post-apocalyptic Australia. Max (Tom Hardy) is surviving and running from his past, but soon gets mixed up in Imperator Furiosa’s (Charlize Theron) plot to save the slave brides of the evil warlord Immortan Joe (Hugh Keays-Byrne). From there, its go, go, go. The dialogue and backstory are sparse, relying on its imagery, rich world and bizarre characters to fill in the rest. While Tom Hardy is an excellent quiet protagonist, Charlize Theron’s character of Furiosa is many times more front and center, and boy is she cool.

This film gets hammy at times, but it’s quite clear that it knows it. Instead of shying from it, Mad Max goes full on into its bizarreness (and there is a lot of that) asking you just to go with it and enjoy the ride. The entire film is basically one long chase sequence, breaking now and then, but never losing momentum. The stunts and practical effects are nothing short of genius, standing out among many of its computer generated, shaky cam action peers. It’s not only one of the greatest chase sequences ever pioneered in film, but delivers some of the best overall action in a long time. Director George Miller isn’t just at the top of his game with this one, he’s just raised the bar in action really, really high.