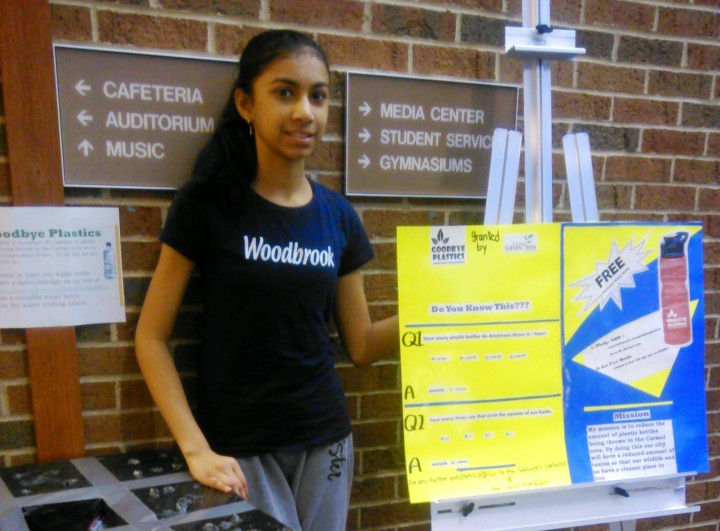 Laasya Mamidipalli with her project poster. “Goodbye Plastics” was her theme. (Submitted photo)

Clay Middle School seventh grader Laasya Mamidipalli wants to do her part to say “Goodbye Plastics – Get Your Own Bottle.”

Mamidipalli got the idea for the project as she watched so many plastic bottles being thrown away in the school cafeteria. She began to be concerned the effect this would have on the environment.

“One fact I learned is Americans in one hour use enough plastic water bottles to circle the earth equator more than four times,” Mamidipalli said. “Facts like that opened my eyes to what’s going on with an environment. I learned how to schedule and manage my time for the project.”

Mamidipalli collected 400 plastic water bottles from the students and staff from Clay through a large box near the cafeteria.

After people donate at least one water bottle, Mamidipalli directed them to her website at laasya.wix.com/goodbyeplastics to take a survey, included is a pledge to use reusable water bottles and to continue helping the environment.

“Right now the only way is the water fountain, which is really ineffective for many people,” she said.

Nanditha Kolur was one of her friends, who helped her with the project. Mamidipalli said Clay Middle School principal Todd Crosby’s support was key as well.