You are at:Home»Current in Carmel»Carmel Community»Carmel ultra-marathoner takes on challenge 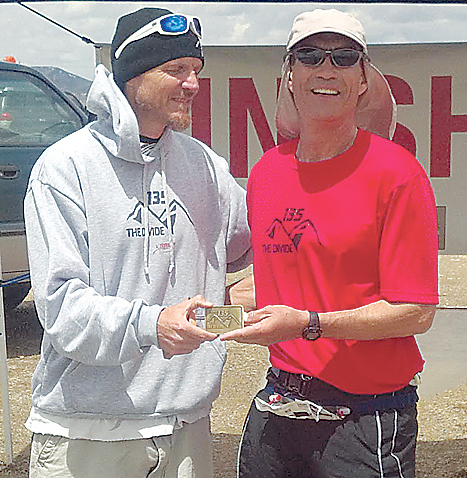 Charlie Scott (right) after a race in Colorado.
(Submitted photo)

Charlie Scott had planned to retire as ultra-marathoner after the Divide 135 in Colorado.

That changed after the 57-year-old Carmel resident won the Divide 135 in 31 hours and got an invite to the Badwater 135, billed as the world’s toughest foot race.

“This is a bucket list race,” Scott said. “Divide 135 was going to be my last race. But you can’t say no to Badwater. That’s like retiring from golf and Augusta National calling you and saying would you like to play a round of golf.”

The race, set for July 28-30, is run from Badwater Basin, the lowest point in North America (282 feet) at the Death Valley National Monument in California to the east shoulder of Mount Whitney (the highest point in the southern 48 states). The 135-mile course covers three mountain ranges.

“When you run for 30 hours it challenges everything,” Scott said.

The race is intentionally held in July where ambient temperatures can reach 120 to 130 degrees and road temperature as high as 200.

Scott, a 1976 Carmel High School graduate, played football and ran track at Carmel and then played football at the University of Evansville.  After college, he got into foot races and then got into duathlons (bicycling/running). Scott eventually ran Boston Marathon.

“I ran my first ultramarathon on the day my son (Charlie) was deployed to Afghanistan (jn 2009),”  said Scott, whose wife Sara also ran in the Wyoming Double Marathon that day.

Sara will serve as his Badwater crew chief.

“She’s been a nurse at Riley Hospital for years so I’m fortunate enough to have a nurse,” Scott said. “Their work is gruesome. When she was my crew chief for the Divide, she was awake for 44 straight hours.”

Scott said most ultra-marathons have aid stations every eight to 15 miles.

“But they can’t set up aid stations in Death Valley because it’s too dangerous for people to work at the aid stations,” Scott said. “They can’t stand out in the heat for 135 hours. So every runner has to have a crew. This particular race you are allowed one vehicle and four crew members.”

His daughter Ashley, a 33-year-old ultramarathon competitor, and another crew member can do some pacing and run along behind Scott.

“Some racers require a pacer because late in the race, a runner can be oxygen-deprived or hallucinate and may run off the trail,” Scott said. “It’s good to have a pacer for support and safety.”

Since this will be Scott’s final race, he wanted to run for a cause so he is running for the Challenged Athletes Foundation to raise $20,000 to allow 10 physically challenged athletes to achieve their fitness or competition goals.

“I’ve been lucky enough to run a 100,000 miles on my own legs,” Scott said. “It will give me great satisfaction to think there will be 10 people put there enjoying something they couldn’t do before. I like to think everyone donating is donating a little bit of energy for me to complete this. Fewer people have completed the Badwater than have stood on the top of Mount Everest.”