You are at:Home»Current in Fishers»Fishers runner places 2nd in half-marathon 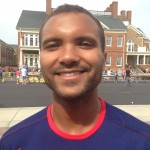 Brandon Russell was pleased with his finish in the half-marathon race at the Carmel Marathon, not so much with his time.

The Fishers resident finished second in one hour, 10 minutes and nine seconds on April 18. Julius Koskei, a Kenyan now living in Hebron, Ky., won in 1:05:04. The temperatures were a little warmer than usual for a mid-April morning start.

“The time wasn’t as good as I wanted,” Russell said. “I wanted to run under 1:09. It was little humid. I don’t do well in humidity. It was nice to get second place, though.”

Russell, 28, said the half-marathon was a good preparation for Indianapolis Life 500 Mini-Marathon, which he plans to run on May 2.

“I was hoping to run faster here than the Mini, but I didn’t run as fast as I wanted so hopefully I run faster at the Mini,” Russell said.

Russell said the break is a little tight between the 13.1-mile races.

“Hopefully I’ll recover well and be able to do it,” Russell said.

Russell is originally from Columbus, Ohio, but moved to the Geist area when he was nine years old.

“I then walked on (the track and field team) at Ohio State for a year,” said Russell, a quality specialist at the microbiology lab at Nestle. “It just wasn’t for me.”

Lilian Mariita, another Kenyan training out of Hebron, Ky., was first among female participants in the half-marathon in 1:24.01.

Westfield residents and training partners Lucie Mays-Sulewski and Kim Weiss finished 1-2 in the women’s portion of the marathon. Mays-Sulewski, 44, won in two hours, 55 minutes and 37 seconds. Weiss, 36, placed second in 3:01.07.