You are at:Home»Current in Carmel»Obituary: Dietrich E. Scholz 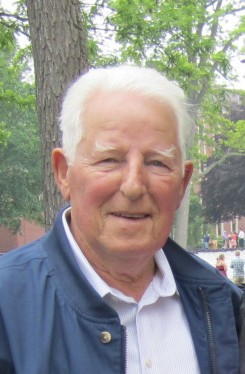 Dietrich E. Scholz, 81, Carmel, passed away April 6, 2015, surrounded by his family.  He was born November 4, 1933, in Berlin, Germany, the son of the late Hans and Elisabeth (Binet) Scholz.  He married his sweetheart, Ursula (Soerensen) Scholz, on March 17, 1962.  She preceded him in death on July 7, 2002. Dieter came to the United States via Ellis Island in 1957, and he served in the U.S. Army, where he perfected his baking skills.  After being discharged from the Army, he returned to Indianapolis, where he owned and operated two different locations of Gourmet Bakery and Tiffany’s Bakery in Glendale.  Dieter is survived by his daughter, Angie Hall, her husband Steve, and their children, Adrienne, Nikki, Shannon, and Stevie; his daughter, Debbie Wiggins, and her children, Natalie, Eric, and Zachary; siblings, twin brother Hans Scholz, Ursula “Uschi” Bamberger, Evi Henrich, and Berndt Scholz; and several nieces and nephews.  He was preceded in passing by his brother, Eberhardt Scholz, sister, Marianne Keul; and brother, Lutz Scholz. The family wishes to express their sincere appreciation and thanks for the excellent care provided over the years by Dr. Napoleon Maminta and Dr. David Rardon. In lieu of flowers, memorial contributions can be made to Autism Speaks, Leukemia & Lymphoma Society, or the Humane Society for Hamilton County.  Online condolences may be shared by visiting www.flannerbuchanan.com.