You are at:Home»Current in Carmel»Carmel Community»Purdue student wins MTNA prize 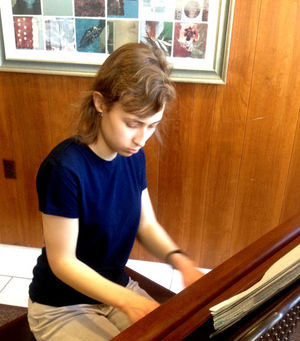 Julie Puckett, a freshman in the College of Engineering, won a Music Teachers National Association Composition Competition award for her self-written piano piece, “In Future Space.” (Photo by Megan Tarter for The Purdue Exponent)

Thinking up a story helped Julie Puckett get over a bout of musical writer’s block — and led to the 18-year-old Carmel composer’s victory in a national association’s composition contest last month.

“This piece kind of started over a year ago,” said the musician, now a freshman engineering major at Purdue University. “I had the main theme figured out, but I wasn’t able to figure out the rest of it at first.”

When she finally succeeded, the result was “In Future Space,” a seven-minute work for solo piano that won first prize in this year’s senior composition competition of the Music Teachers National Association.

And what broke the compositional logjam? “I decided that what I had felt like the beginning of an adventure, a saga. What I picture in my head is an action TV hero who is going to save the world.”

With that scenario in mind, Puckett was able to complete the work, which she will presented in a recital March 23 at the MTNA’s annual conference in Las Vegas. The senior division that Puckett won is open to composers 15 to 18 years old. Towin top honors, a composition must first pass through state and divisional levels before topping the field at the national level.

Continuing to describe the hidden scenario that helped her finish “In Future Space,” Puckett said: “The middle of the piece calms down a bit when the hero reaches the planet and finds out he can solve the problems there. Then the piece gets into some active rhythmic patterns, and there’s a dramatic ending: He’s solved the problems for this planet.”

Puckett acknowledged that her style in this piece and its space-adventure story could be compared to John Williams. Overall, however, her composing inspiration at the piano draws on the New Age styles of David Land and Jim Brickman. “In Future Space” represents a change of direction: “Normally my music is pretty relaxed, more flowing. The dramatic elements are more pronounced here.”

Pucket has played piano for about 10 years. She moved to Carmel with her parents, Thomas and Alyce, in seventh grade. She’s self-taught as a composer, having started out improvising for fun at the keyboard.

“I liked improvising, and I would generate little ideas based on that,” she said. As she matured, however, “I would think about how I wanted the mood to progress, about what I want to say…I’ve come into more structure as the years have gone on.” Puckett has gotten recognition for her composing before, twicewinning the junior composers contest of the National Federation of Music Clubs.

Besides composing, Puckett likes playing piano and trombone. In her last two years of high school, she won four awards at the Ball State Jazz Festival. She has continued playing jazz trombone at Purdue. “They have a great music program there,” she said. “There are a lot of people who are interested in music, so that way I’ve continued composing.”

Professionally, however, her sights are set on an engineering career, with a particular interest in coding and programming. Otherwise, Puckett enjoys reading historical fiction and adventure books as well as spending time with friends.

“I like just doing things — unstructured time with people,” she said. Emphasis on structure is reserved for her studies and her musical compositions. “I caught on to the idea of cohesiveness — a piece should not musically ramble,” she said.