You are at:Home»Current in Carmel»Carmel Community»CarmelFest Grand Marshal announced for 2015 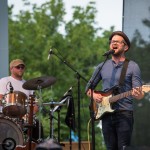 Editor’s note: On April 20, Kaufman’s management team notified Current and the CarmelFest Chairwomen that Kaufman needed to cancel his appearance in July. He will no longer be Grand Marshal due to an “international” opportunity he is attending instead. A replacement has not been announced.

The Grand Marshal for the CarmelFest was today confirmed to be none other than Josh Kaufman, winner of “The Voice” season 6.

Prior to competing on “The Voice,” Kaufman played local gigs with his band in the Indianapolis area and supported his family as an SAT prep tutor.

His official CarmelFest role will be as Grand Marshal for the CarmelFest 4th of July Parade that is starting at10:30 a..m. on July 4 from Carmel Drive and AAA Way.

The CarmelFest Parade Chairperson is Peggy Powell, her co-chair is Bec Hunter.