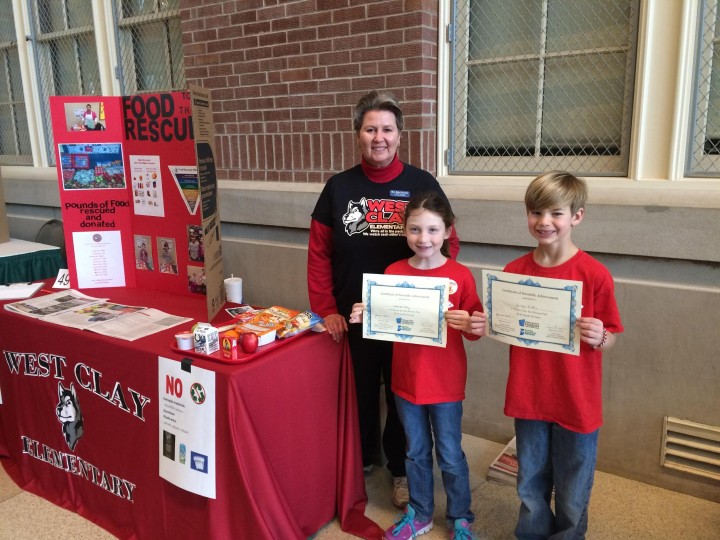 Lauren Clay and Briggs Griffin with cafeteria manager Beth Galloway took first place in K-4 division of the Eco Science Fair on March 20. Clay and Griffin won tickets to an Indianapolis Indians game and received certificates for their presentation to the judges.

“When we got into the auditorium, I thought we had a pretty good chance because I saw the judges writing Food Rescue on their paper,” Griffin said. “I was thinking and hoping we would get first prize.”

Griffin and West Clay second grader Lauren Clay did indeed take first place in the kindergarten through fourth place division at Eco Science Fair at the Indiana State Museum in Indianapolis on March 20.

Under the guidance of cafeteria manager Beth Galloway, West Clay collects unopened food that the students do not eat at lunch.

Nicki Griffin, Briggs’ mother, transports the food from the school and to the Merciful HELP Center at Our Lady of Mount Carmel. Lauren got involved because her mother Kate Lopez is part of the Carmel Clay Schools Green program.

The students had a poster board displaying how the program works.

“She and Briggs did a really good job talking to all the adults that were asking the questions (about the project),” Lopez said. “I think that helped a lot.”

“I was really proud that I won because I was doing it for our school,” Lauren said. “I wasn’t really thinking about (winning). I was just hoping people would sign up.”

The students had a sign-up sheet for the Food Rescue.

“So people could sign their names and schools and we could forward it on to the Food Rescue people,” Lopez said. “So then they could start a program  in their schools. The kids were really excited about that.”