You are at:Home»Current in Geist»DNR: Dead fish in Geist Reservoir not surprising 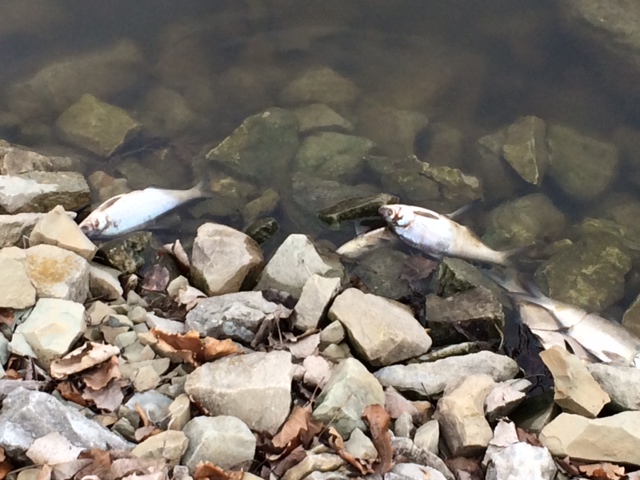 Last week, residents with homes on Geist Reservoir expressed concern about seeing a higher than usual number of dead fish floating on the water. The Geist Lake Coalition addressed concerns of homeowners along the waterfront, saying there’s nothing to worry about.

“Most accounts so far are that the vast majority of the dead fish are gizzard shad. I am not surprised that there are lots of dead or struggling shad, I’d actually be more surprised if there weren’t,” said Rhett Wisener, IDNR fish biologist.

He explained that what has happened on Geist Reservoir happens quite frequently at many Indiana lakes that have abundant populations of shad following a winter where there are long stretches of cold temperatures and extended periods of ice. “I expect to hear about and see this at other lakes,” he said.

Fish kills happen when the ice on a frozen water body has been covered with snow for any length of time.

“Shad are pretty fragile fish that are more sensitive to cold water and lower oxygen levels than many other species in our lakes. As a result, winter die-offs are not uncommon with winter conditions such as this past year,” he said.

Geist Reservoir has a high number of large population of shad. “Shad numbers tend to be high, which is usually the case at most of the reservoirs in central and southern Indiana where they are found,” he said.

While the die-offs are unsightly to residents, they don’t completely eliminate the shad even though at times it appears the kills were pretty devastating.

“Usually you don’t even ever notice much of a dip in their numbers because they rebound so quickly. The mechanism shad have for dealing with being a fragile species is that they are extremely prolific spawners.”

As the spring thaw continues, he expects that residents will see more over the next few weeks. “If a lot of fish other than shad start showing up dead, then we may want to investigate and see if this was something other than a result of winter kill.”