You are at:Home»Current in Zionsville»Zionsville firefighter receives two top honors 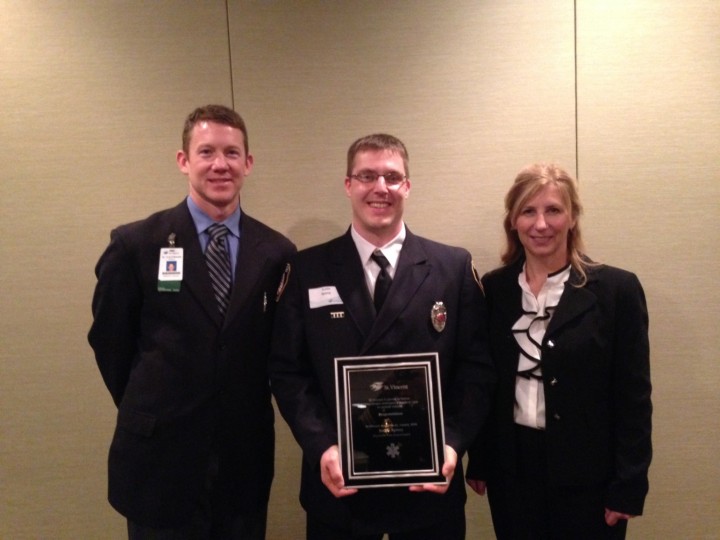 In the last two months, Zionsville firefighter Justin Spivey has received two top honors for excellence in his job. He earned the Paramedic of the Year award at the 2015 annual Firefighter’s Ball in February and recently became one of eight people in the Indianapolis area to receive the 2015 St.Vincent Angel Medic Award.

“It’s always an honor when it’s your peers nominating you for an award just doing your daily routine,” Spivey said.

The St. Vincent Angel Medic Award is given to individuals that have been nominated by their peers and leaders to be recognized for outstanding patient care and performing their duties in a manner that reflects the St.Vincent Health core values.

“To say Justin is worthy of this award is an understatement. The praise and respect that Justin has earned in this last year has been unbelievable,” stated ZFD firefighter/paramedic Scott Mamaril, chairperson for the St.Vincent Angel Medic awards committee for the fire department. “Justin is a great representation of what the Zionsville Fire Department works toward every day with professionalism, patient care and serving our community.”

Steve Gilliam, division chief of EMS for Zionsville FD, said that excellence in a variety of areas led to Spivey’s honors. As a paramedic, which requires more training than that of an emergency medical technician, Spivey has spent a great deal of time learning through clinical hours, hours in the ambulance and emergency room and with critical care training.

While the training can be draining for most, “Justin has been the opposite,” Gilliam said. “He’s looking for stuff to learn and share with his crews.”

Spivey started as a volunteer with the Zionsville Fire Department and was hired in 2009 to a full time position.