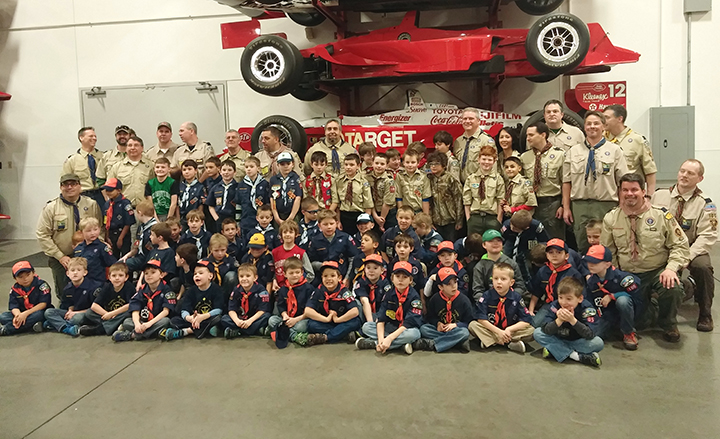 There are definite perks to living near the Racing Capital of the World, and on March 7 Cub Scouts and families of Zionsville Pack 105 experienced one of those when it held a Pinewood Derby at Target Chip Ganassi Racing, one of the top teams in IndyCar series racing. TCGR has won the Indianapolis 500 four times and has 10 IndyCar championships.

Grant Weaver of TCGR is the father of four Eagle Scouts. He arranged for the pack to use TCGR’s lunchroom for the race, where 58 Pinewood Derby cars sped down the tracks. There were speed cars with elegant cut-outs, American flags, a police car with working lights, characters from SpongeBob and Minecraft, and a baseball bat. A car resembling a pool table received the Best in Design award.

Pack 105 has incorporated several Indy 500 traditions into its Pinewood Derby, including a “flyover” by inflatable jet-wielding Tiger Scouts, the singing of “Back Home in Indiana” by a den leader, the (chocolate) milk victory chug and kissing the bricks.

Even TCGR has gotten into the Pinewood Derby spirit by creating a 1/32 scale replica of its 2010 Indy 500 winner from the standard Boy Scouts of America kit. The model is derby-legal and accurate down to its tiny sponsor stickers. Despite being based on one of the world’s fastest cars, this one is purely for show and hasn’t been raced.

Following the Pinewood Derby, Pack 105 Scouts and families toured TCGR’s facility, including the workshop where proprietary parts are created, the car assembly area and the garage that houses the transport trucks and retired IndyCars.

The Scouts were fascinated to see a steering wheel up close; it looks like a video game controller and isn’t much bigger. They learned that drivers can customize the steering wheels to their liking and that there’s even a button that sends them a sip of water through a tube in the helmet.