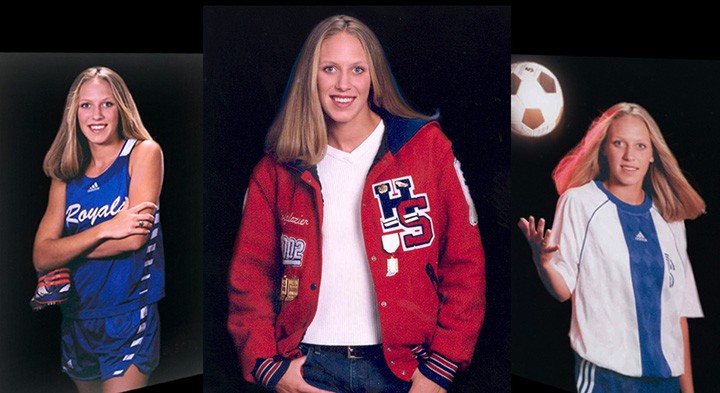 Carrie Colglazier, an All-State athlete and HSE graduate known for her hard work, teamwork, optimism and devotion will be remembered during an annual community service work day on March 28 for the community. (Submitted photo)

An All-State athlete and HSE graduate known for her hard work, teamwork, optimism and devotion will be remembered during an annual community service work day on March 28 for the community.

Carrie Colglazier, a 2002 graduate and Butler University student, was killed in the summer of 2003 by a drunk driver, along with her friend and recent graduate of Butler, DJ Rahn, from Elkhart.

“Carrie was very outgoing, enthusiastic and passionate; she made your day better every time you saw her,” said Athletic Director of HSE, Jim Self. “She touched lives and impressed people just with all the different interests she had. She was just a unique lady.”

Colglazier, who won a scholarship to Butler, was a two sport All-State athlete in soccer and track and was a member of the FFA and National Honor Society at HSE. She won each major varsity team award, including MVP Defense her sophomore year, the Golden Boot Mental Attitude Award her junior year, and the MVP offense her senior year.

In addition, Colglazier was All County and All Conference for three years and ICGSA All State her senior year. She was a member of the National Silver Medalist Horse Judging Team and served as an officer for FFA and 4-H.

“(Attending) HSE was the best thing that ever happened to Carrie,” said Karen Colglazier, Carrie’s mother. “She blossomed then and just embraced every opportunity she had.”

Shortly after Colglazier’s death, Self, Karen and Bud Colglazier, Carrie’s father, decided to establish a scholarship in memory of Carrie. Funding for the scholarship, in its 12th year, comes from the community service work day. Members of HSE girl’s track and soccer athletes, along with FFA and National Honor Society members, are available for an eight-hour work day, with a minimum of a $25 donation per worker.

All proceeds from the event will go to the Carrie Colglazier Scholarship Fund, awarded annually at Senior Awards Night each May.

For more information or to download a volunteer request form, go to http://carriecolglazier.org/.