You are at:Home»Current in Zionsville»Rep. Brooks speaks on persecution of Christians 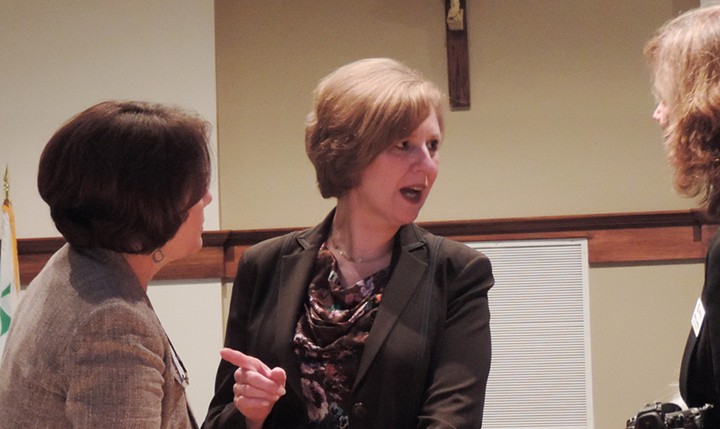 Rep. Susan W. Brooks (R-IN), discusses a point with a member of the audience at a recent presentation on persecution of Christians in the Middle East. The forum was held at St. Alphonsus Liguori Catholic church in Zionsville. (Photo by Anthony Kaufmann)

“The threat of Islamist extremism is very real and is growing very fast,” according to Rep. Susan Brooks (R-IN) in remarks made during a discussion forum March 10 at St. Alphonsus Liguori Catholic church in Zionsville.

“The Islamic State (ISIS) has recently taken control of large swaths of territory in the Middle East and Africa,” she said, “and has issued an ultimatum to Christians and others to covert to their extremist brand of Islam or face heavy taxes and persecution.”

Brooks told the group of 100-plus that ISIS is growing bolder, pointing out that at least 180 Christians are now being killed each month in the region.

Reviewing recent ISIS activity, Brooks pointed out that 15 Assyrian Christians were murdered in February and another 260 are still being held hostage. On March 7 ISIS forces attacked the Assyrian villages of Tel Maghas and Tel Nashri with heavy weapons, causing more than 3,000 residents – mostly Christian – to flee. ISIS also kidnapped and later beheaded 21 Christians in Libya.

Boko Haram, a Northern Nigerian terrorist group, which recently announced it was joining forces with ISIS, last April abducted several hundred school girls and sold them into slavery. It has since gone on a killing spree, killing hundreds of Christians and kidnapping others. During the same period, it burned at least 36 churches and caused thousands to flee their homes. According to Brooks, more Christians were killed in Northern Nigeria in 2012 than in the rest of the world combined.

Brooks added that the most recent World Watch List released by the Open Doors foundation shows persecution of Christians is growing at an accelerated pace.  Extreme persecution is now carried out in Syria, Iraq, Iran, Afghanistan, Pakistan, Somalia, Nigeria and the Sudan, and is rapidly growing in other areas. Open Doors annually publishes data on the most dangerous places to be a Christian.

“ISIS is neither a religion nor a nation. It’s an idea based in terrorism. Moreover,” she added, “the movement is well financed with oil money.” Conservative estimates show ISIS receives up to $1million each day from oil-rich sources, she added.

One of more successful ways ISIS is growing is through social media, Brooks

“Most of these are targeting young people,” she said.

Despite the growing threat both foreign and domestic, Brooks said, “our country is not leading in the Middle East as we should.” She pointed out that until recently, she heard little from her constituents concerning Islamic extremism.

“America began to wake up to the threat after the school girls were kidnapped in Nigeria,” she said, hopefully. She added that even though America does not yet have a strategy for dealing with ISIS, “there are numerous forces at work on the problem. Not all of these are government entities,” she said, pointing out that Pope Francis recently strongly condemned violence against Christians in Iraq, saying that such action “offended God.”

Meanwhile, the government has stepped up monitoring social media and Internet activity by known terrorist organizations.

“The problem is getting ahead of them,” she said. She personally condemned the swap last May of five Afghan detainees at Guantanamo Bay for the release of Army Sgt. Bowe Bergdahl who was kidnapped by the Taliban.

“We now know that some of those detainees have returned to the battlefield,” she said. She also pointed out that since American troops were withdrawn from Afghanistan in 2011, “the country is a more dangerous place than it was before the war.”

In a question-and-answer session following her remarks, Brooks pointed out that the State Department maintains a presence in countries throughout the Middle East for the purpose of gaining more precise information about terrorist activities.  Asked about the investigation into the attack on the United States diplomatic compound in Benghazi, Libya on Sept. 11, 2012, she said that “we are now interviewing people we have not interviewed before.”

Brooks, who is a member of the House Select Committee on Benghazi, said that the recent revelation of then Secretary of State Hillary Clinton’s personal e-mails has “given us considerable new information,” adding, “we hope to offer a comprehensive report to the American people soon.”

“More than 4 million Syrians have fled their country since the civil war began,” she said, adding, “Jordan alone is on the verge of collapse with more than 600,000 refugees living in overpopulated camps without adequate food, shelter or medical help.”

Asked what we can do to help defeat ISIS, Brooks said we should write to Congress urging support for House Resolution 139, which condemns violence against religious minorities in the Middle East, and House Resolution 1150 calling for an International Religious Freedom Act.

“We also need to form coalitions with other nations,” she said, adding, “the United States can’t do it alone.”

Brooks, a former U.S. Attorney, was elected to Congress in 2012, representing the 5th Congressional District, a seat vacated by retiring Congressman Dan Burton.