You are at:Home»Current in Carmel»Carmel Community»Transformers roll out at the Indianapolis Children’s Museum 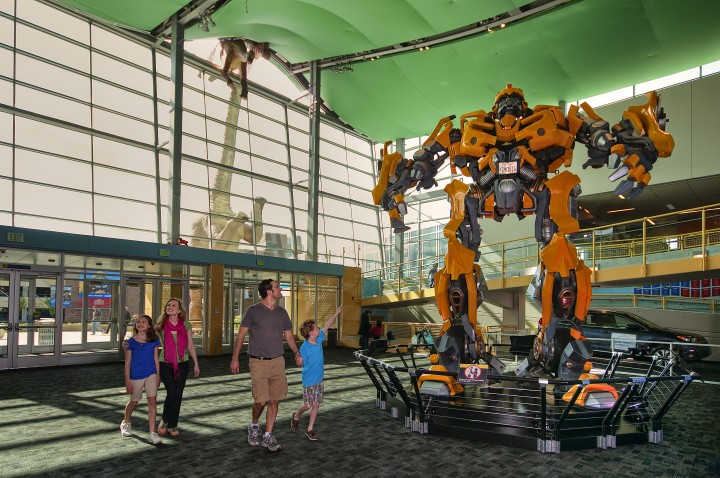 A Transformer inside the Indianapolis Children’s Museum. (Submitted photo)

Brace yourselves. On March 7, the Indianapolis Children’s Museum will be filled with autobots and decepticons. They’re part of the “Transformers: Robots in Disguise” exhibit, which coincides with the launch of the Cartoon Network series on March 14. Bumblebee, Optimus Prime, and Grimlock will be featured, as well as multiple levels of toys and puzzles to play with. In addition, guests can learn about the process of toy creation, transform themselves into Bumblebee, and even design their own Transformer.

A team from the Children’s Museum visited Hasbro to see how their design team has worked to create more than 6,000 unique Transformers over the years.

Learning about that process helped to inspire the exhibit.

“It’s not something anybody has done before… it’s ours,” said Charity Counts, associate vice president of exhibits. “It’s a once-in-a-lifetime thing here in Indianapolis.”

At the exhibit, guest can walk through every step of the creation process; they can create their own Transformer design, test its 3D capabilities, and watch as a 3D printer at the museum creates parts all day long. Kinect technology allows guests to step into a battle as Bumblebee, fighting in a battle based on the Cartoon Network “Robots in Disguise” series. Also featured at the exhibit will be the voice of Peter Cullen, who’s played Optimus Prime for 30 years.

Access is free with admission to the museum, and the exhibit runs until July 6.

This isn’t the first time Transformers have come to town. In March 2011, the Children’s Museum unveiled Bumblebee as a permanent icon in the welcome center. The 17-foot, 1-ton Transformer is a prop from the 2007 live-action film. Then in summer 2012, the museum premiered a special “Seeing is Bee-lieving” program, with Bumblebee transforming from robot to Chevy Camaro (and back). A new program is coming later this month, that will add Optimus Prime. For more, visit childrensmuseum.org.