Westfield Police Chief Joel Rush has positive news about the city – crime is trending down. During a presentation to the city council on Feb. 23, Rush presented law enforcement statistics from last year.

“In 2014 we had a very good year, really. Burglaries dropped almost in half, thefts were down and thefts from vehicles were down,” he said. “That’s a very good thing, especially for our officers who work hard every day. The things we are doing and measures we are taking are working.”

Of the top two categories, Rush said 102 thefts came from shoplifting and another 102 from buildings. Sixty-seven were from motor vehicles, 16 were motor vehicle parts or accessories, six were bicycles and 94 were other. Of the 175 battery reports, Rush said 146 were not aggravated, 13 were aggravated and used body parts, 14 were other dangerous weapons or spitting; and two involved a knife or cutting instrument.

“Fighting crime is a partnership between the police and the community,” Rush said. “Communication is key.”

Other areas highlighted include:

● Vehicle lockouts – Rush said the department is one of the few remaining that offer assistance. In the past 10 years, officers have been called to unlock 8,470 vehicles including 684 in 2014.

“We’re trending down on crashes that involve injuries and fatalities,” Rush said, adding that when U.S. 31 construction is complete the number of accidents should decrease. “As our population grows and traffic construction grows, we’ve increased the amount of stops we make.”

The top accident locations in Westfield 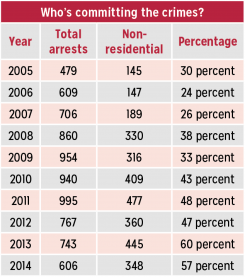 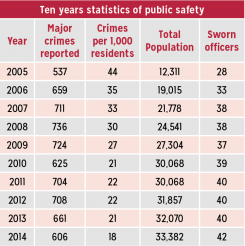