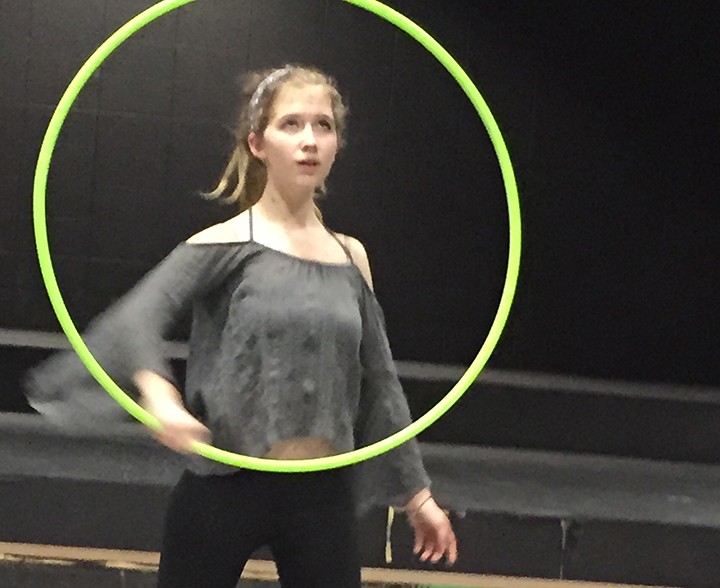 Carmel High School junior Amy Hanners will be showcasing her hula hoop skills at the Behind the Scenes Club talent show.

However, she is not permitting to perform her most unique skills, fire-eating and twirling a hula-hoop ring of fire. For liability reasons, those acts are considering too risky for a high school auditorium.

“I had a good friend who I met through hula hooping and she gave classes on (fire-eating) so I took one of those,” Hanners said. “I’ve been practicing waiting for a time to use it. It’s just a fun trick to say you can do.”

Hanners, who plays the French horn and mellophone in the school’s marching band, has been competing in hula-hoop for more than a year. Hanners will be performing a dance routine with her hula-hoop in the show, which starts at 7 p.m. on Feb. 27 at the high school auditorium. The tickets cost is $5, which allows the ticket holders to vote for their favorite. Additional votes are sold for $1 each.

Jack Denger is more known around the high school as the drum major in the marching band the past two seasons.

What many might not know is Denger is a juggling champion. Denger won the International Jugglers Association juniors title last summer at Purdue. He was second in the IJA juniors competition in 2013 at Winston-Salem, N.C.

Denger, who plans to attend Butler, said he doesn’t plan to compete in any more international juggling competitions.  Denger started juggling when he was 7 years old and took part in his first competition at age 10.

Denger, who juggles balls and clubs, was the judges’ winner in BTSC Talent Show as a sophomore and an audience winner last year.

The BTSC is parents’ booster group for the school’s theater, technical theater and film department. The club gives out four scholarships at the end of the school year to students majoring in one of those fields in college. The talent show serves as a fundraiser for those scholarships.

John Burlace, associate director of choirs, and Britta Schlicht, a performing arts teacher, and Linda Jones, a math teacher whose son was involved in Carmel performing arts before graduating, will serve the three judges.

Becky Schmelz, president and Talent Show Coordinator, said it was tough to pick the 20 acts from the 38 who auditioned. Schmelz said many of the students competing in the show are in the marching band, choir or performing arts.

“It’s amazing what these kids can do,” Schmelz said.