You are at:Home»Current in Carmel»Carmel Community»Table tennis takes off at MCC 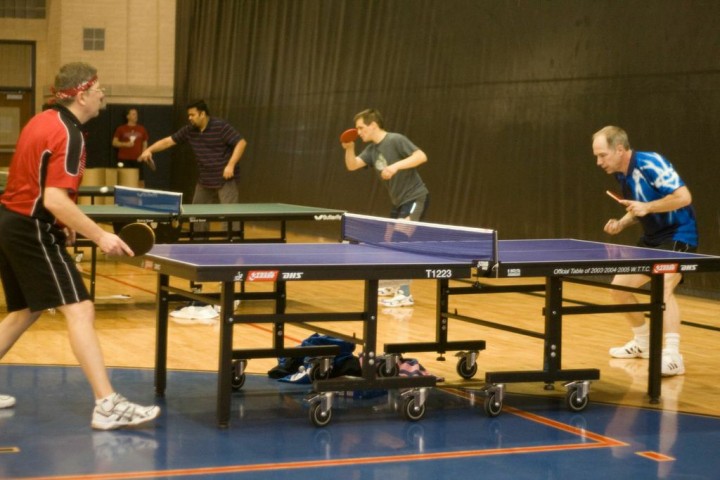 David Stout took one look at the Monon Community Center and had a realization.

“When the Monon was first being built, my mother lives across the street and I said this would be a great place for a table tennis club,” Stout said.

Eventually Stout, a ranked player and certified coach, approached MCC officials with the idea. The MCC Table Tennis Club, which started in 2009, keeps growing each year. The club meets year-round on Tuesdays from 7 p.m. to 10 p.m. and Saturdays from 10 a.m. to 1 p.m. in Gym C.

Stout said he expects 40 to 50 participants, from junior to senior players, to compete in the Monon Community Center Table Tennis Open on Feb. 21. The  2-star tournament, which offers prize money, will be held from 8 a.m. to 7 p.m. Stout and his son James, 14, both plan to play in the tournament. James, a Creekside Middle School eighth-grader, is a top juniors competitor.

“That’s the great thing about the sport, anybody can play,” Stout said. “Men and women can compete against each other because we have rated events. It’s just a good sport that people can play all their lives.”

“Luo and I won the state doubles title about three years ago,” said Stout, who is a MCC staff member.

The club started out with six tables.

“The first year we kind of struggled,” Stout said. “Some days there would be 10 to 12 people and then other times we would only have five or six people.”

After a year, the momentum eventually started to build. The club grew to nine tables and is now at 12 tables. Stout said 35 to 40 people showed up for a recent Saturday session.

“We typically average between 20 and 30 players,” Stout said. “We have players from beginner level up to my level of advanced players..”

“It was just like any other (college) team,” Stout said. “We practice for two-and-a-half hours every day and traveled to tournaments every month. They had partial scholarships for table tennis.”