You are at:Home»Current in Carmel»Carmel Community»‘The Odd Couple’ hits the stage Dec. 27 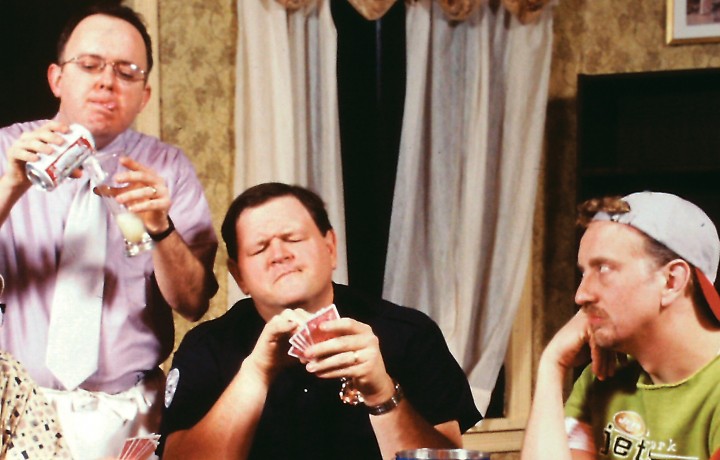 Returning from Beef & Boards’ 2001 cast to perform in the upcoming production of “The Odd Couple” are (from left): Eddie Curry as Felix Unger, Dan Scharbrough as Murray, and Jeff Stockberger, who will play Oscar Madison. (Submitted photo)

Beef and Boards Dinner Theatre will premiere their rendition of the Neil Simon comedy “The Odd Couple” on Dec. 27.

The comedy, which celebrates its 50th anniversary in 2015, will feature longtime Beef and Boards actors like Eddie Curry as the uptight Felix Unger and Jeff Stockberger as the laid back Oscar Madison.

“The main thing that’s interesting is that everyone has worked with Beef and Boards before,” Curry said. “It’s just like playing basketball. [Jeff and I] know how to work off each other because we know what to expect from one another.”

Curry and Stockberger began their professional and personal friendship in 1989, when they met while performing outdoor theater shows in Texas. Stockberger eventually moved to New York while Curry joined Beef and Boards in Carmel, Ind. After September 11, 2001, Stockberger left New York to live in St. Louis. Once a job opened up at Beef and Boards, Curry was quick to suggest Stockberger apply.

“My unemployment had just run out,” Stockberger said. “There was certainly no work. I had [a moving]truck for six days, so I stopped and visited with my friend. [Beef and Boards] offered me a job. I worked as stage manager for four-and-a-half years.”

While Stockberger says the job gave him a deeper respect for behind-the-scenes theater workers, he often ended up being thrown onstage for various roles, earning him a consistent acting job with Beef and Boards.

“The audience loves him,” Curry said. “He and I get paired up in Martin Lewis-type roles. We have a pretty good time together.”

Despite a great sense of camaraderie, working at Beef and Boards requires a quick turnaround on rehearsal times and set design.

“Most theaters probably take three to four weeks for rehearsal, to sit down and discuss the script. We don’t take time for that,” Curry said. “We’re looking for people who can do that process on their own. The actors will get about six days of rehearsal before we start throwing costumes, lights and other set elements into the piece.

Curry says that the newly acquired rehearsal space for Beef and Board productions allows for a highly polished production.

“It makes me come in a lot more prepared than other people,” Stockberger said.

Both occasionally work for other theater groups, which they say afford them an often awkward amount of preparation.

“I get antsy now whenever I work some place where they have a longer process,” Curry said. “I think ‘What are you going to do with all this time?’”

Both Curry and Stockberger hope to provide a classic, even nostalgic interpretation of “The Odd Couple.”

“‘The Odd Couple’ is just fun,” Curry said. “The writing is a road map to the rhythm of delivery. I want to make sure you can hear Neil Simon’s intended delivery. You have to regard Simon as one of the classic comedy writers of our time.”